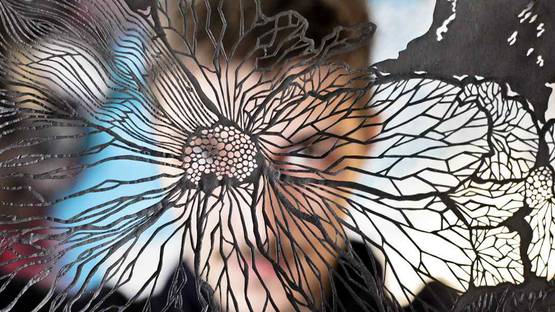 Influenced by his botanical background, Rubbish welcomes us to this world of abundant flora, which he puts into parallel with the Art Nouveau and Symbolism styles he cultivates and stages in his paper cut-outs - as in his Metamorphosis series, where man and flora merge Ovid’s Metamorphose. He nourishes each of his works with various references drawn from painting, religious icons and even tattoo art.

Rubbish dedicates himself to the delicate and lacy sphere of paper cutting: each piece, requires hours of meticulous craftsmanship, long hours of chiseling, in order to achieve that spectacular effect. Very impregnated by the surrounding nature, he opens the doors of this abundant flora, so his work could be described as contemporary Art Nouveau, since the floral encompasses is actually a central motif in his oeuvre. The eclecticism of Aurel Rubbish mirrors fragments found in fine oil painting, religious portraiture and icons, but in tattoo drawing as well. The artist discloses a very fine thread of his soul, exhibiting his general fascination with nature employing floral visual elements in his work. Each piece systematically arouses deep emotional response in those who have the chance to come across one on the street.

Thematically, the artist chooses a variety of subjects, frequently following vanities. His characters often exude eerie emotion, zombiesque feel, and the overall darkness. Poetry has a strong presence in the works of Aurel Rubbish, as it’s constantly intertwined with the delicate strings and pieces of his compositions.

Aurel lives and works in Besançon in France.