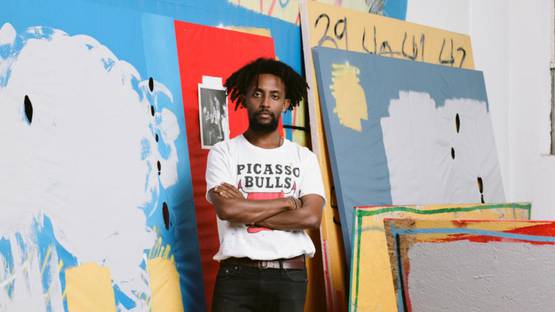 With the aim of drawing attention to the lack of racial diversity through the history of painting, Awol Erizku creates photographs, paintings, sculpture, and video installations that evoke classical artworks whose subjects are replaced with models of color. Through the wide range of mediums, he strives to calm and modify his perception of unjustly neglected African characters. Using the most famous artworks, from the photorealist still lives of Dutch Masters, to Minimalist constructions, he gives the 21st-century update to the familiar images. Remembered for his Girl with a Bamboo Earring (2009) that reflects Johannes Vermeer’s Girl with a Pearl Earring (1665) with the strong message, he managed to stand out among the artists of this young generation.

Erizku was born in 1988 in Ethiopia and grew up in South Bronx, New York where he attended Art and Design High School. Prejudices and negativity he faced every day in the neighborhood he lived encouraged him to try to create a different image of the people who were not glorified through the arts and culture. In 2010, he received B.F.A. from the Cooper Union and four years later his M.F.A. from Yale’s Visual Arts program. His debut New York show, held at The FLAG Art Foundation in 2011, was met the critical acclaim, placing the artist alongside recognized names as Duane Michals, Roe Ethridge, Richard Prince, and Roy Lichtenstein.

In 2015, at New York Museum of Modern Art Erizku represented his “visual manifesto”, a film named Serendipity in which he uses a sledgehammer to break the bust of David, replacing it with the one of Egyptian queen Nefertiti as an expression of the idea that the American culture doesn’t value enough the work of black people. Standing out as a producer of the music mixes also, on this project he collaborated with MeLo-X, using the clips from lectures by painter Kerry James Marshall who speaks about the importance of the black figure in art.

Classical Art Through the Black Models

For his series New Flower: Images of the Recycling Venus (2015), he visited four cities in Ethiopia, hiring 33 different sex workers as models to pose him in hotel rooms. Referring to Manet’s Olympia and Ingres’ La Grand Odalisque, he questions the ideals of beauty through the European painting and the museums that feature it. His talent to express a clear message in other mediums is proved by work titled Oh What a Feeling, Fuck It I want a Trillion that alludes to Donald Judd’s framed series of Stacks with iron boxes installed one above the other on the wall, from floor to the ceiling. Erizku’s sculpture is consist of basketball hoops with 24-karat gold-plated nets instead of Judd’s minimalist objects, as a symbol of urban young people and his growing up on the courts of Bronx. "The piece operates as a striking metaphor, embodying the anxieties inherent to life as a young contemporary artist by aligning basketball with the practice of making art—both are games, shaped half by talent and half by luck. If you ask me, you have more to chew on when you look at those stacked hoops than those metal boxes.” This sculpture was a part of his 2014 exhibition at the Hasted-Kraeutler Gallery, focused on the homages to the famous artistic names as Marcel Duchamp and David Hammons.

In the beginning of 2017, Awol Erizku shot Instagram's most popular photo of all time: an instantly iconic portrait of Beyoncé, pregnant with twins, posed in front of a floral bouquet with green veil adorning her head and body. The photo - which the singer shared to her official Instagram account on February 1st to announce that she and her husband Jay Z are expecting twins - reached more than 5 million likes in 3 hours and took over Twitter as well, with ‘Twins’ becoming the top trend on the platform minutes after the image went live.[1] The stunning photo was followed by the full maternity shoot released on Beyoncé’s website including photographs of the infamous star swimming in sparkling, foamy water; dreamy, fairytale-like images with her five-year-old daughter Blue Ivy; and those of her posing on top of a red car full of flowers. Although the images haven’t been credited, ARTNews reported that a source close to Miami-located Nina Johnson gallery, where Erizku exhibited in the end of 2016, said that the photographer and painter confirmed via text that he took the photo.[2] This wasn’t the first time that the Addis Ababa-born artist photographed the infamous star – in 2014 he shot photos of the couple during their trip to the Louvre museum in Paris, France.

Awol Erizku shot Instagram's most popular photo of all time

Following the trends of his generation, Erizku maintains his online presence, making it some sort of extension of his practice. Curating exhibitions on Instagram, his fans can follow his work during the regular gallery hours from their homes. His style is determined by the formal elements of historical images, but at the same time, it resists the limitations through the moods and psychological aspects of his subjects that give the personal mark to each of his pieces. His models are often common people, the ones he sees every day on the streets, which helps him to show that their beauty is equally valuable as the beauty from the classical works. “I’m not going to be answering questions as much as challenging ideas and preconceived notions and just [letting] the audience interpret what they want to. There’s an aspect of my work that I want to be universal.”

Featured image: Awol Erizku in his studio, 2016
All images copyright of the artist