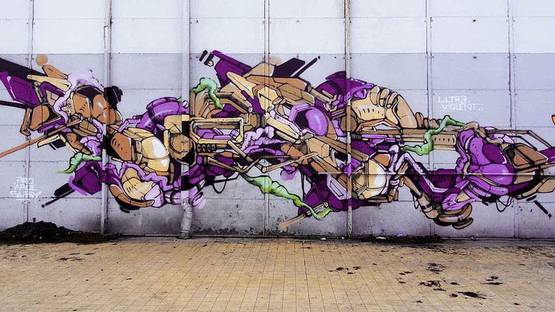 Diving into the pond of creativity in early years made Babs one of the most prolific graffiti artists of his generation. Those were although times and in order to define personal style, he had to work really hard and develop authentic composition and tagging. Babs was struggling, but he managed to remain persistent and guide his career without any compromise. At present times his works reflect a more distinct style and but are fulfilled with history and emotion.

Babs was born in Paris in 1975 discovers graffiti at the age of 11 years. Although self-taught, in 1986 he began tagging the streets of his city Vitry-sur-Seine and the cities bordering on the southern suburbs. He painted his first walls collectively from the early 90's initially with the crew 3HC. Seduced by the most transgressive form of graffiti the Vandal in 1992, he painted his first metros, trains, and RER in the capital with the DSP. He then realized several hundred graffiti on rolling under twenty pseudonyms for more than fifteen years.

Authentic approach to coloring and forms

Guided by multiple influences, Babs started working like any purist by tagging the streets of his city. Fascinated with the effects of the genre, in the early 1990s he started painting the Metro and train in the vandal’s tradition. Around 2010, Babs left the underground painting and transferred to painting on canvas within the gallery space. The new technology in regards to paint, revealed him a new facet of his personality through a painting on canvas by using acrylic and spray paint. Babs is focused on Abstraction, movement, and energy and is largely inspired by the Cubist and Minimalist currents.

Basb is known of going from pure abstraction to mild figuration

Absolutist of the genre, he works in one of the most radical branches of the Parisian environment, within the UV and TPK groups. In 2008 his first painting is presented at Artcurial's Art Graffiti / Post-Graffiti sale. While continuing his journey through the illegal sphere, he is invited in 2009 to participate in the exhibition Graffiti state of the premises at the Galerie du Jour Agnès B. where he realizes a monumental work on the largest wall under the Great Glass.

The Significance of Babs

Together with artists Keag and Sore, he forms a group Graffeur Delight in order to promote more dirty and raw vandal spirit. In 2012 he collaborated with Seth (Julien Malland), Dem189, Lek and Sowat with whom he was invited to paint at the Palais de Tokyo as part of the exhibition Lascot Project, in the bowels of the Palais de Tokyo orchestrated by Hugo Vitrani. The artist has appeared in the documentary about the scene titled Peintres & Vandales, as well as Writers 20 ans de Graffite – 1983-2003. Despite working legally, the activity of Babs still is refreshing and innovative and his name is grand in regards to the fact of him being one of the prolific figures of initial graffiti scene in France.

Babs lives and works in Paris.

All images used are courtesy of Hive Minor