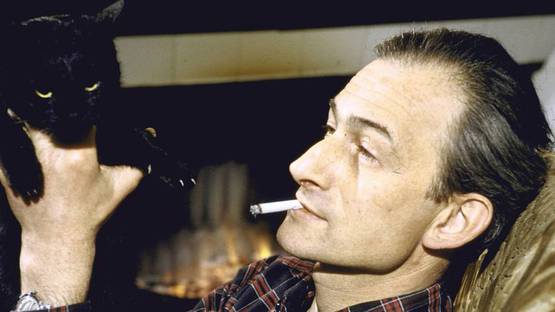 Showing a resolute tendency of rejecting all usual conventions of the art world throughout his career, Balthasar Klossowski de Rola was a Polish-French figurative painter and one of the pivotal artists of the 20th century. He stayed clear from avant-gardism, concentrating instead on traditional landscapes, still lifes and portraits in the traditions of the Old Masters. By far better known by his pseudonym of Balthus, this painter was notorious for his provocative depictions of young girls. He was also intriguing for not allowing himself to become a public person for as long as he lived, hiding many facts of his biography from prying eyes. However, after his death, we are now able to find out all the stories and details about Balthasar Klossowski de Rola's life[1]. Balthus dedicated his whole life to painting, literally breathing and living for his art. As he himself stated in one of the greatest explanations of the medium: Painting is the passage from the chaos of emotions to the order of the possible.

Early Stardom of a Wonder Child

Balthasar Klossowski de Rola was born during the year of 1908, in Paris, the most crucial city for all of modern art. His father's name was Erich and he held a reputation of a noted art historian who wrote a monograph about Honore Daumier's work. Klossowski's mother, Elisabeth Dorothea Spiro, was a part of the cultural elite in Paris and was known as the painter Baladine Klossowska. Furthermore, Balthus's older brother, Pierre, was a philosopher influenced by the works of the Marquis de Sade. Growing up in such an environment did not really allow Balthasar to become anything else than an artist. When he was thirteen years of age, young Balthasar painted a series of forty drawings that depicted a story of a young boy and his cat[2]. The entire project was influenced by the poet Rainer Maria Rilke, who was actually his mother's lover at the time. The series was published and the public was stunned when the word got out that the author was in his first teen year of life. Klossowski de Rola enjoyed this celebrity wonder-child status for years. In 1926, he visited Florence and was copying frescos of the legendary Piero della Francesca, an experience which inspired another early ambitious work by the young painter. Fascinated by Francesca's work, he covered the walls of the public church in the Swiss village of Beatenberg with incredible frescos in 1927.

A Rebellious Young Artist in Paris

The young painter spent the years between 1930 and 1932 living in Morocco. After that, he was drafted into the Moroccan infantry in Kenitra and Fes and worked as a secretary, a position which allowed him to sketch his paintings for most of the time. La Caserne (1933) is a fine example of Balthus' work from this period. In 1933, he moved into his first Paris studio at the Rue de Furstemberg. Interestingly, Balthasar Klossowski de Rola showed absolutely no interest in the current movement of Cubism as he shunned its significance on a daily basis[3]. Rejecting cubistic shapes and forms, Balthus instead utilized traditional technique and depicted pubescent young girls in erotic and voyeuristic poses, such as The Guitar Lesson (1934). As expected, such topics were highly controversial to the public and the sexually explicit depiction of young girls secured Balthus' provocative reputation. In 1937, the painter married Antoinette de Watteville, a member of an influential aristocratic family from Bern. The two actually knew each other for many years as Antoinette was the artist's model on many occasions. During this golden era of his career, Balthus' art was praised by many influential names of the period, such as André Breton and Pablo Picasso. He was friends with many notable individuals of the Paris scene as well, keeping in touch with the likes of Joan Miró and Alberto Giacometti.

The Rise to Glory

Logically, the years prior and during the World War II saw a strong decline of Balthus' creative output. After the -invasion of France by German forces, he fled with his wife Antoinette to Savoy to a farm in Champrovent near Aix-les-Bains. There, Balthus began work on two major paintings - Landscape near Champrovent (1942–1945) and The Living Room (1942). The remaining war years were difficult as Balthasar moved around Europe a lot and was a part of the French resistance to some extent. In 1948, his career took a turn as he was asked by a friend Albert Camus to design the sets and costumes for his play titled as L'État de Siège. Balthus accepted the project and did an excellent job. He also worked on several other plays in the future, highlighted by the sets for the Barrault's adaptation of Julius Caesar in 1959. For a period of time, Balthasar lived with his step-niece Frédérique Tison in the Chateau de Chassy in the Morvan. There, he finished his large-scale masterpieces La Chambre (1952) and Le Passage du Commerce Saint-André (1954). As he was becoming more and more popular, his international fame grew with many exhibitions of his work held in all the corners of the world. It was then that Balthus started to cultivate an image of himself as an enigma, deliberately staying in the shadows and holding his career's facts in the dark. In the year of 1964, the painter moved to Rome where he presided over the Villa de Medici as a director of the French Academy in Rome. Balthus also became a close friend of the famed filmmaker Federico Fellini at this time.

In the year of 1977, Balthus moved to Rossinière, a municipality in the Riviera-Pays-d'Enhaut district of the canton of Vaud in Switzerland. There he lived with his second wife, a Japanese woman named Setsuko Ideta whom he married in 1967. He met her in Japan, during a diplomatic mission and fell n love with her instantly. The photographers Henri Cartier-Bresson and his wife Martine Franck portrayed the painter and his wife in what will eventually prove to be a rare image of the married couple. Throughout his mature career, Balthus stayed true to his original characteristic of staying classical[4]. Therefore, he was never a part of any current movement nor style, forever staying genuine to his outcast ideas of traditional techniques. Interestingly, he was one of the few living artists to be represented in the Louvre - his painting The Children (1937) was acquired from the private collection of Pablo Picasso and was featured in the famous French museum. De Rola died in Rossinière, in the year of 2001. What followed was a funeral which had an extremely high visitor rate, with many prime ministers, painters and rock starts attending. Such a large number of people comes rather ironic when one considers that Balthasar tried remarkably hard to lead a quiet and under the radar kind of life. Regardless, after Balthus passed away, dozens of biographies of this artist started to appear as the veil seemed to be finally lifted and the public could finally look into the private life of one of the most intriguing artists of all time.

Ultimately, observing Balthus' life and career is always an interesting feat regardless of what your standpoint on his art is. He was an artist who all avant-garde and modern movements wanted in their circles, yet he never chose to become a part of any contemporary group. That tendency towards solitary art-making and the mysterious veiled life he had made him an intriguing person both then and now, whilst Balthasar's bizarre narrative scenes and dreamlike atmospheres remain some of the finest pieces 20th century has to offer. His life can be observed as a rebellious story of a very talented man, but it can also be observed as a lonesome and depressive life on the margin. This angle would be evidenced by Balthus' following and somewhat disheartening statement: I was born in this century, but I belong much more to the 19th century.[5] However you chose to look at it, it will be so - just as the case is with most aspects of Balthus' art.

Featured image: Balthus - The artist with his cat - Image via sartle.com
All images used for illustrative purposes only.