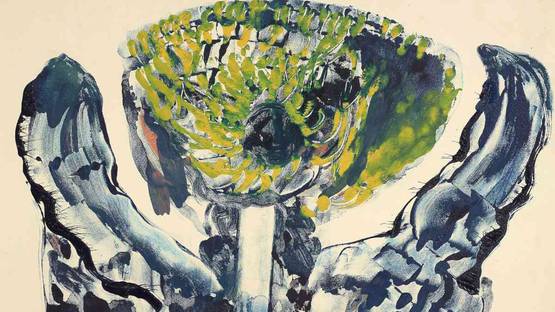 Barbara Schwartz was an American Abstract artist. She experimented with wood, glass, and even produced pieces in bronze and aluminum.

Born in Philadelphia, Schwartz received her B.F.A. from Carnegie Mellon University. After moving to New York, she had her first solo show at the Willard Gallery on East 72nd Street in Manhattan in 1975. Subsequently, she was represented by Hirschl & Adler Modern and then the Andre Zarre Gallery. Her work was presented at the 1979 Whitney Biennial. She had taught at the School of Visual Arts since 1978 until her death in 2006.

Seeking to vitalize abstract painting, she made it more dimensional while linking it to non-Western decorative traditions. She drew on balanced organic and geometric forms as well as Islamic influences to revitalize the genre. Her abstract painted plaster reliefs were also loosely associated with the Pattern and Decoration art movement of the '70s and '80s. In the 1990s, she began introducing glazed ceramic into her work. Her work is in the collections of the Brooklyn Museum, the Solomon R. Guggenheim Museum and the New York Public Library.