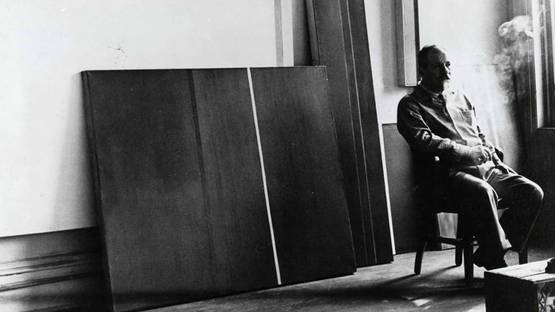 Considering the artist as the creator of the world, Barnett Newman thought that the humans have the primal instinct to create that is reflected in both ancient and modern art. Although sharing the interest in myth and primitive unconscious with Abstract Expressionists, his enormous colored canvases with trademark “zips” moved him away from the gestural abstraction of his contemporaries. In the beginning, his work did not provoke any particular reaction, but during the time, Newman became a base for Minimalism, and second generation of Colored Field painters. Feeling that the World War II impoverished the art, he attended to bring it back to the beginning by rejecting any established approaches a mode of image-making.

Newman was born in 1905 in New York, as the son of the Jewish immigrants from Poland. During the high school, he started to take drawing lessons at the Art Students League where he met Adolph Gottlieb, who had introduced him to prominent artists and gallery owners. Newman gained his education in philosophy at City College of New York and after that decided to help his father in his clothing manufacturing business until it failed caused by the 1929 stock market crash. After the position of substitute art teacher, a creation of the short-lived magazine about worker’s rights, and marriage with the teacher Annalee Greenhouse, he decided to give up painting and study ornithology and Pre-Columbian art, occasionally organizing exhibitions and writing catalogs and art reviews. He cooperated with the gallery owner Betty Parsons who had represented Mark Rothko, Clyfford Still and Jackson Pollock, Newman’s close friends. By 1944, after the four years, he had returned to painting, now inspired by Surrealism that made him destroy all his previous work because of its figurativeness. He maintained that practice throughout the entire career, exterminating every piece that failed to please him.

At the beginning, Newman's art was inspired by Surrealism

Exploring the Space Beyond the Form of Physical Presence

A decisive moment in Newman’s career occurred in 1948 when he invented a pictorial element called a “zip”. His first painting of that kind Onement I introduced this vertical stripe of color that divided the painted surface and became a trademark of his work. The zips represented the place where the Newman invites the viewer to enter and feel the totality of separateness and individuality of their own, but also of the entire world, society or universe. It was an embodiment of physical body, as opposite to the color field that contains the raw energy of life. Constantly repeating this line, he contemplated his life within the universe and at the same time reviled the passage to the space beyond the form of the physical presence into the place of his color field. At the beginning, the color field was mottled, but during the time, the colors became pure and flat. The zips had a role to define the spatial structure, dividing and uniting the composition. Purely abstract, his paintings remained untitled, but some of them later got the names addressed on Jewish themes, like Adam and Eve, Uriel or Abraham, which was beside biblical patriarch, also the name of his father who had died two years before the painting was made. His series of black and white works, The Stations of the Cross (1958-66), helped to recover from a heart attack and its subtitle Lema sabachthani or Why have you forsaken me referred to the Jesus’ last words on the cross and was also interpreted as a memorial to the victims of the holocaust, as a part of artist’s intention to evoke the victims of humanity throughout history. Distinctive series is recognizable for its monochrome palette of black and white applied on the raw canvases, with the accent on the use of the zip. Waiting for the spontaneous urge, it took him eight years to finish the series. These paintings referred to something beyond their formal extremes, both physical and metaphysical. Painting about tragedy, reduced palette was the only way to truly express the suffering, but he succeeded to achieve the quality of color without the use of it. As Newman himself said, a painter should try to paint the impossible.

The Constant Struggle for the Recognition

A negative response to his new works exhibited at Betty Parsons Gallery and even violent reaction of the audience, as splashing and defacing the paintings, which continued on the next few shows, resulted in the Newman’s withdrawal from the gallery scene. He devoted himself to the writing and his pieces were not seen anywhere between 1951 and 1955. In 1957 he had a heart attack and during the early 60’s, the critics started changing their opinion. In 1959 Clemet Greenberg organized his solo show at French & Company and from that occasion, Newman was considered as an important representative of the Abstract Expressionism. Expanding his work into sculpture and lithographs, his pieces became a part of few important museum exhibitions that consolidate his position within the movement. Still, many people could not understand his art and misinterpretations followed him during his whole career. He was so resigned, that he sometimes himself rejected the offers to exhibit with his contemporaries. Even after the big solo show at Guggenheim in 1966 where his Stations of the Cross were displayed, the situation was not much improved. That, fortunately, did not stop him from creating some of his most important works in the next couple years, including the series Who’s Afraid of Red, Yellow and Blue (1966-68) and monumental sculpture Broken Obelisk (1963-69).

Barnett Newman expanded his work into sculpture and lithographs

The Broken Obelisk, Who's Afraid of Red Yellow and Blue and Cantos

Among his six sculptures, the Broken Obelisk also known as Black Needle is the most famous and the largest. Made of steel, it consists of two parts – converted obelisk above the pyramid, connected at a surface of only two and quarter inches. There are 4 multiples in total. One of them was placed in front of the Rothko’s Chapel in Huston in 1970, in the middle if the reflecting pool. The sculpture embodies Newman’s meditation on ancient Egypt, changing the Western association with death and instead of it producing the eternal image of transcendence.

Two paintings from a four-part series Who’s Afraid of Red, Yellow and Blue whose name was a reference to the play by Edward Albee Who’s Afraid of Virginia Woolf? have been the subject of vandalistic attacks in museums, although Newman did not have any preconceived idea of its subject or final meaning. With the aim to create something different from his previous pieces, he painted the canvas in red and realized that it works only with yellow and blue, making the confrontation with the work of Piet Mondrian.

His series of lithographs, the 18 Cantos, the only print series in color, refers to musical analogies. “Their symphonic mass lends additional clarity to each individual canto,” the artist wrote the introduction. On these paintings he was using thinner zips, not paying attention to the paint that spanned over the margins, testing the idea of spatial boundaries.

Among his peers from the New York School, Newman was the most productive writer, especially at the beginning of his artistic career. In his most famous essay The Sublime is Now published in the magazine Tiger’s Eye on December 1948, Newman discussed the work of several 20th-century European artists who, according to his opinion, destroyed the old standards of beauty. Coming from the ancient Greek ideals, he investigated the ways that contemporary philosophers reconciled these ideas with the appearance of modern styles. The final and greatest success occurred between the ideas of beauty and sublime that merged into the unique whole, creating entirely new sublime ideas about the beauty. Asserting the priority of the aesthetic over the social, he claimed that humans were artists before they were hunters, and man first built an idol of mud before he made an ax. The original question “What?” was the initiator of the prime scientific quest and the domination of science over the mind of modern man has been accomplished by ignoring this question which made advancements in the arts and science no longer possible. Newman was also very interested in ideas and discussion but claimed to never approach any painting with a plan. Focusing on immediate and particular, he created by the intuition. He believed that the main issue of painting was the subject matter that in the case of abstract art, deprived of any classical standards for making art, touching the most basic human emotions. Working with pure forms, starting from the pure idea void of symbolism or allusions, the artist is a creator of an abstract thought-complex. According to him, modern art from its beginnings had been a quest to negate the classical standards of beauty. What the Impressionist started, his generation was left to complete.

The Legacy of Barnett Newman

As a member of several artistic groups, schools and styles, Newman could be classified as Abstract Expressionist, but his art has also been referred to Color Field movement, Formalism, and even proto-Minimalism. His wide oeuvre was comprised of paintings, drawings, prints, sculpture and one architectural model. His earliest works have not been preserved, considering that by 1944 the artist destroyed all of his art pieces. During the late 1950’s, a group of second-generation abstract expressionists began to imitate and develop Newman's style, aiming to remove all subjective elements including brushstrokes. Without his influence, it is quite certain that Color Field Painting would have evolved in a different way. Overshadowed by famous Jackson Pollock and even Mark Rothko, he has unfairly left aside. In 1979, the Barnett Newman Foundation was grounded to promote and help understanding and importance of his work. Barnett Newman died on July 4, 1970, of a heart attack. Misinterpreted and unappreciated during his life, he is now considered as one of the crucial persons of the Abstract Expressionism. Not focusing on the non-representational meaning of shapes and colors, his approach was more philosophical, inviting the viewer to experience the painting both physically and physical.