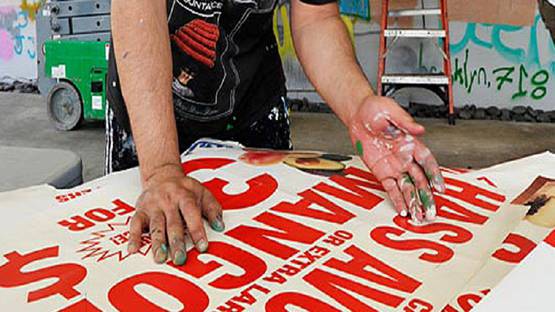 BÄST is the quintessential artist representing Brooklyn, New York. He is also one of the few pivotal figures in the international street art movement to retain a considerable degree of anonymity. Indeed, it is often debated whether he really exists or may be a pseudonym for a side project by another major artist. Without wishing to dispel any enigmatic spell this may cast, we can confirm that he is an individual artist working in a relatively conventional manner.

BÄST's first works, wheat-pasted posters assembled from media clippings then standardized on a photocopier and a screen printing bed, appeared alongside those of the New York-based collective FAILE in the early 2000s. While BÄST's art is comparable to FAILE's in that it bastardises the pop culture aesthetic to create more complex, personal and stimulating imagery, BÄST's own pieces are rougher and hard-edged. They use existing imagery to create uncompromising compositions, in stark contrast to FAILE's personal artworks which aspire to the populist appeal of mass media.

Bast’s "palette" is diverse and esoteric, including characters from the golden age of animation, the homespun iconography of New York's independent fast food stores, and glossy lifestyle magazines pre-dating the era of street style. Facial portraits of imagined characters are the most regular outcome of this process, for instance in Video Six and Big Face. He is lauded both for the distinct, uncompromising nature of his art in an arena swamped with derivative work, and his deft, hands-on application of intricate collage.

The Bast’s exhibitions are rare but attract a great deal of attention. His first solo show, Those Bloody Yanks, was held at Los Angeles' New Image Art in 2007; his most recent exhibition with Lazarides, Scenario Del Riotook place at The Outsiders Newcastle in 2011. A collaboration with FAILE, The Deluxx Fluxx Arcade showed at The Outsiders London in 2010. One of the landmark exhibitions in the urban art movement, it featured playable unique arcade machines designed and embellished by the artists. A solo show, Botulism, took place at Lazarides Rathbone the same year.