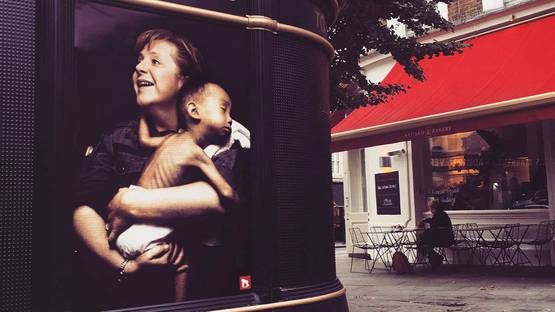 Beast is the pseudonym for an anonymous Italy-based street artist. He has been very active on the streets of Europe and United States since 2009, with a focus on stencils at first and nowadays creating digital collages aiming to highlight political and social issues. His caustic and thought-provoking interventions in the public space comment on contemporary celebrity culture and reveal the artist’s obsession to mash up historical iconic images with faces of politicians. His work makes cogent realistic scenarios using lookalikes, the likeness becomes real and the final effect touches the believable.

A distinctive soloist with a recognizable graphic signature, Beast merges this with a strong social and inclusive approach to his designs. Everything he does is out on the streets and nowhere is this more strongly expressed than in his hometown, Milan.


It is hard working convincing people that they’re not watching ads when looking at my frames in the streets, but if you use an icon that can be understood in any language, like a gold frame, the translation is built in. That was really the beginning of the programme, and once the idea of the frames was accepted, I started producing.

Beast considers the street as an open canvas, working with urban environments, and transforming them to become a part of the city’s journey. It’s an engagement with the public realm that reflects what is happening presently. Beast’s images challenge the spectator's ability to understand what is true and what can be considered plausible within an uninterrupted flow of images proposed by traditional media. The resulting artwork reminds us that our public spaces need to be places for dialogue, it interacts within the notion of the cityscape, and finds its meaning once an interaction with the passer-by takes place.

The Reappropriation of the Past

What Beast has been working in recent years, is reappropriating the past. For him this means constantly picking over the archives.


I think the most important thing is my view of what the photographic archive is. I’ve never viewed it the archive as a museum or a closed chapter. To me it’s much more of a living document. My job is to go in there, pick up the stories, understand why they meant what they meant, and then bring that to life in a new way, or a way that celebrates it.

Working with processes of transformation and replacement, Beast’s role as an artist is that of a mediator. In his view art is not separate from politics, but coextensive with it, playing an indirect and auxiliary role in the mix of political movements. His actions open up an “agonistic space” clearly identified as vital to the practice of public participation to democracy. Beast’s images are the opposite of news flashes, they are full of history’s irony, revealing the loudness of the half-truths. The role of his political subjects is about creating bridges of trust where people from different political views can come together.

Working with his “open air” galleries, Beast subtly changes the city streets to create a dialogue and interplay between the habitat and our experience of it. He shifts the spotlight from the museum work to the immediate accessibility of the artifact, the images take ownership and manipulate city spaces, opening new relationships with daily familiarity. The end result carries conversations, becoming a fragment of the ever-changing city’s history.

Featured image: Beast - street art in London, 2015
All images courtesy of the artist