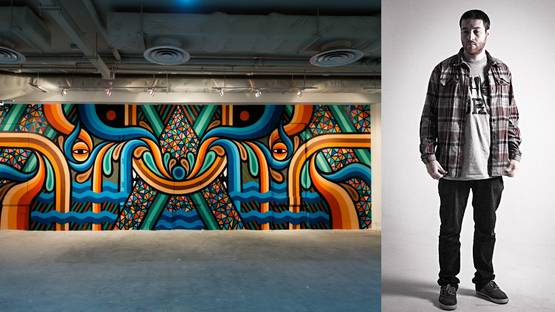 Brad Eastman, known also as Beastman is an urban artist living in Australia, Sydney. He is known for depicting weird and monstrous creatures, which are often painted symmetrical, mainly in blue and orange. He is one of the most distinctive emerging artists in Australia, and is also a one third of the creative group The Hours. Brad has been interested in art ever since he was a child, and also started making art in his childhood. About his interest in art and the art style he developed he said: “I guess I just never stopped following my creative interests. It took years of drawing and painting to develop a unique and original style that I was really interested in exploring further.” He adds: “I grew up skateboarding, and I was really interested in everything that came along with skateboarding culture: Magazines and music and film and photography and making little skate videos with my friends. I was always out and about on the street and stuff. I was always interested in drawing and I studied graphic design when I finished high school. I’ve done lots of different things to lead me here.” His painting is mostly done in studio, except private commissions done on walls of private property and businesses. His inspiration he draws from the people around him. He exchanges ideas with the artists he shares studio with, and is often driven by their work. About art scene in Australia and the artists he works with, he said: “The street art scene in Australia is great; there are a lot of amazing artists here. We’re all friends and we work together on different projects all the time. Because we are so isolated from the rest of the World here, it has forced us to create a really strong local art scene that we can rely on to make a living from, with our art.” Besides painting murals, Eastman says that he loves to paint small works, which was what he started doing in the first place. “To me it’s a separate thing from painting walls and large scale works, it’s much more intimate, time consuming and also a more thought out process.” He studied graphic design in the 1990s, and has also created some of his work on the computer for t-shirts, prints and other various projects, but never had any formal training in painting. Beastman has painted all over Australia, New Zealand, London, Prague, Berlin, Hong Kong, Tel Aviv and New York, but as he says: “Everywhere is different to Australia, that’s why when I am abroad I can’t wait to come back to Sydney, I really feel blessed to have grown up in such an amazing city.”

Beastman started exhibiting in 2005, and has exhibited extensively throughout Australia, as well as London, New York, Berlin and New Zealand. He has curated and organized numerous art exhibitions and events, has designed graphics for various brands including Element, Dosh, The Art Park, Longview and Smirnoff, and has also been commissioned to create artwork for Hyundai, Red Bull, Stone & Wood, Campaign Monitor, Mini, Tiger Beer and Huawei. Beastman was named Best Artist at the 2010 Sydney Music, Arts & Culture (SMAC) Awards, and has also spoke at Semi-Permanent conferences around Australia. He has also been featured in publications such as Empty, Amateur, Kingbrown, Tees, Oyster and more.

Lately he spends most of his time in the studio, making acrylic paintings for exhibitions, and also paint wall murals regularly.