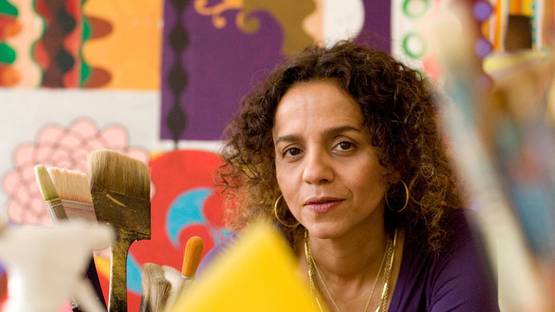 Beatriz Milhazes is an artist from Rio de Janeiro known for her vibrant and colorful collages, prints, paintings and installations. Her artworks are rooted in Latin American and European traditions, yet she mixes the elements of both cultures in a quite innovative way. Her precise, meticulous pieces feature sets of arabesque motifs inspired by Brazilian ceramics, carnival decoration, laceworks, and baroque architecture. Milhazes is seeking for interesting geometrical structures in the world around her, in her daily surroundings, and even the rhythms of Brazilian popular music influence the energy of her lines as well as her circular and floral forms.

Milhazes was born in Rio de Janeiro in 1960 and before dedicating herself to fine arts, she was a social  communication student at Faculdades Integradas Helio Alonso. In 1980, she enrolled at the School of Visual Arts, where she showed a strong interest in the principles of collage. Her interest in collage is closely related to her curiosity and knowledge of both Latin American and European art and her style mixes various influenced from both Brazil and the Old World. In addition to the cultural mixing, Milhazes is fascinated with the decorative arts, fashion, and geometry. She is an innovative artist who likes go off the beaten path and she has developed her own processes of art making back in the 1980s, after the careful research of various printing procedures.

Milhazes shows her fascination with the decorative and digital arts

There is a careful balance of order and chaos in Milhazes’s pieces which reveals the influence of the 20th-century painters from Brazil and the United States, such as Tarsila do Amaral and Donald Sultan, as well as the great masters of contemporary art, such as Henri Matisse and Wassily Kandinsky. Milhazes claims that her work often explores the concept of conflict. Those vibrant, almost aggressive colors that she combines with a variety of unusual forms create strong dialogues and challenging, dynamic compositions that can’t be easily categorized. The artist also works with circular shape, suggesting concentric movements and spatial disorientation. The tension that clearly exists in Milhazes's projects is not only between figuration and abstraction but also between the various influences mixed in her work. I am a painter and I speak an international language, but my interest is in things and behaviors that can only be found in Brazil, the artist claims.

At the end of the day, technique is very important in the context of my work, Milhazes said in one of her interviews from 2008. She worked with collage early in her career by creating mixed media pieces consisting of fabrics inserted into paintings. In the late 1980s, she started creating  complex projects made of various geometric shapes and arabesques by painting the contours of these motifs on a transparent plastic sheet which is then applied to the canvas and left to dry. After the artist peels the plastic away, the final image is transferred onto the canvas, even through some parts of it might get lost during the transfer. This process also explains why there are identical shapes that appear in different paintings. The graphic and chromatic exuberance of Milhazes' works is truly puzzling because it treads a fine line between the careful deliberation and chance.  Her images often look like dazzling explosions of colors, but their precise compositions prevent them from falling apart . No matter the strong tension between various elements found  in Milhazes’ art , her paintings are still quite coherent.

Milhazes' pieces are often considered new abstract with a twist, because of her unusual techniques and Brazilian folk references that she incorporates into her pieces. These Brazilian references which are related to the use of vibrant colors and various shapes are associated with the poorest part of the country and they were assumed to be of little value to the intellectuals and artists. However, Milhazes’ work has shown that this is not entirely true and that even the social elite of her native country respects some traditional values and aesthetics. Milhazes’ work is highly esteemed by art critiques and it is included in the most prestigious gallery exhibits and international collections, such as the Solomon R. Guggenheim museum, The Metropolitan and Carnegie museum, to name a few.

Featured image: The artist's portrait - image via tucairalah.blogspot.com
All other images courtesy of artsy.net