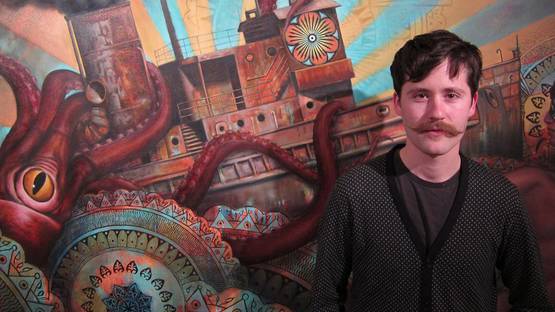 Beau Stanton is a painter and muralist who creates from tiny eye miniatures to large-scale murals. He combines classical oil painting with intricate patterns inspired by decayed infrastructure and ancient architecture and ornaments.

Stanton is originally from Southern California where he studied Illustration and Drawing and Painting. He relocated to New York after graduating in 2008, where he apprenticed for Pop Iconoclast Ron English. Stanton was influenced heavily by such luminaries as Robert Williams and Mark Ryden, as well as Realist painters Andrew Wyeth and Alphonse Mucha.

Beau Stanton explores the dynamic between graphic iconography and classicism, juxtaposing apocalyptic imagery with the aesthetic excess of Victorianism in order to synthesize organic and ornamental into a coherent post-millennial point of view. Stanton fuses elements of 19th-century letterpress printing designs with masterful figurative oil painting, embellishing and manipulating focus, light and perspective.

He gilds his apocryphal myth with the graphical elements of creation, destruction and rebirth, inviting the viewer inside our collective unconscious ornamented by layers of chipped artifice and the rusted machinations of time.

Stanton’s interest in iconic visual symbols, as well as Jungian archetypes, often provide the foundation for his images. In order to concoct these elaborate compositions, he is constantly compiling photo reference of ornaments and patterns as he finds them in architectural elements, old books, and everyday objects. These artifacts appear in Stanton’s paintings as visual cogs in heavily ornamented machine-like compositions. The initial studies are then distilled into highly ornate compositions utilizing a variety of techniques including ink renderings, digital media, and screen printing. Finally, the pieces are fully rendered in delicate layers of oil paint, manipulating focus, light, and perspective.

Beau Stanton has exhibited throughout the United States, Germany, the UK, Italy, Japan, and Australia.

Stanton continues to live and work in Brooklyn, NY.