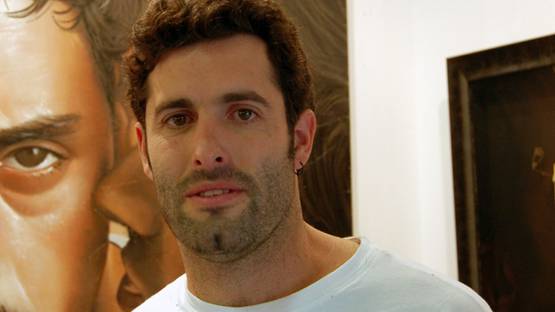 Belin, born in Linares, Spain, creates large-scale portraits of distinct characters that feel realistic and caricature-like at the same time. Their large heads and the dynamic, colorful designs behind them lend the works an eye-catching surrealism. It's the type of work that makes you look twice and marvel at the power of a few spray paint cans.

Belin did not receive formal training. He drew from a young age but not until 1995 did he pick up a spray paint can. His talent got him noticed by Von D and others and last year he traveled to Miami for Art Basel. Belin's hometown and L.A. find common ground in the ever-present threat of buffing.

Spain’s Belin is well-known for his rosy-cheeked graffiti characters, which have a strong fine art quality to them. Belin is equally adept at painting huge murals, canvases and making sculptures, all of which carry his distinctive style.

While visitors will see familiar faces in his work, like those of President Obama and Hugo Chavez, Belin leaves it up to the viewer to decide who they see as true superheroes. He sees the less famous figures in his works as superheroes, whether they realize it or not. "They're normal, common people that work on the street in whatever normal job -- whether in a bakery, as a taxi driver or a painter -- that have trouble because of the economic crisis," says Belin. "We're all superheroes and we don't know it until a difficult moments comes and we find our strength."

Belin has already kept a wide curriculum, his pieces have been exposed all around Spain and countries like Germany, Italy, United Kingdon, Netherlands, Brasil, Israel, Mexico, USA. even he painted for brands like Dockers or Carhartt and tattoo artists like Kat von D from L.A. INK.