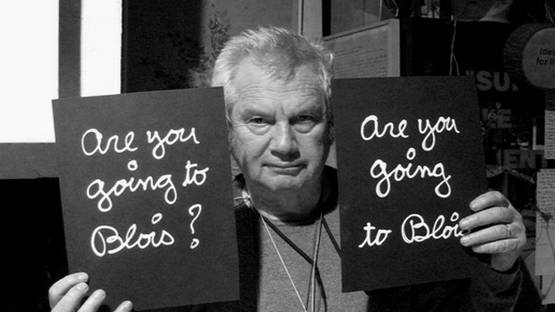 Benjamin Vautier is a French artist of Swiss origin born 1935 in Naples, Italy also known simply as Ben whose trade mark is: instructions and explanations written in cursive writing in lurid pastel tones on objects. Before he become best known for his actions and writings paints he was inspired by Yves Klein, Marcel Duchamp and the Nouveaux Réalistes so Vautier developed a distinctive personal style with leanings towards Dada. Years before Andy Warhol did anything of the kind, Ben produced work based on variations on a highly simplified banana motif. In addition, Vautier worked with configurations composed of multiple individual parts recalling Jean Tinguely's machines. He is also active in Mail-Art and is mostly known for his text-based paintings; an example of the latter is his work "L'art est inutile, Rentrez chez vous" (Art is Useless, Go Home).

Ben and his mother were multiply traveled: Switzerland, Turkey, Egypt, Italy to finally settle in Nice in 1949 where he studied at the school of the Imperial Park and College Stanislas. Later he finds a job at the bookstore Blue Dwarf as errand boy.

In the 1950s, Ben became quickly interested in the French dada artist Marcel Duchamp, the music of John Cage and joined the Fluxus artistic movement in the 1960s, taking part in international Fluxus Festivals and frequently participating in public Performances. In 1959, Vautier founded the journal Ben Dieu. In 1960, he had his first one-man show “Rien et tout” (Nothing and Everything) in Laboratoire 32 on the first floor of his record shop “Magazin” that he ran between 1958 and 1973.

In the early 1960s, many artists attempt to capture the world as a work of art. Ben is going to sign anything that has not been "holes, mysterious boxes, kicking, God, chickens, etc. "Connecting art and life, explaining that everything is art and everything is possible in art.

Ben then disseminates the ideas and spirit Fluxus in France and becomes the defender of an art attitude. In 1965, in his shop, he created a gallery of three by three meters in its mezzanine "Ben doubt everything." It exposes Biga Alocco, Venet, Maccaferri, Serge III, Sarkis, Filliou ...

In 1975 the Museum of Modern and Contemporary Art at the Centre Pompidou purchased the store in Nice, restored by Ben, and regularly presents with its collections. During the early 1980s, the return of a past in Berlin on a fellowship year, he met young artists (Combas, Hervé Di Rosa François Boisrond, Rémi Blanchard, etc.) group to which it gives the name of Figuration. In 1987, Ben had his first solo exhibition at the Museum of Ceret and Art Labège Toulouse Centre.

In 1995 he had his first retrospective at the Museum of Contemporary Art in Marseille. Works of Ben are present in major public and private collections worldwide. Very involved in the contemporary scene, he has always supported young artists and gives his views on all the news, be it cultural, political, anthropological and artistic in its regular newsletters and prolix.

Exhibitions in France and abroad as well as numerous retrospectives attest to Ben Vautier's continuing success.