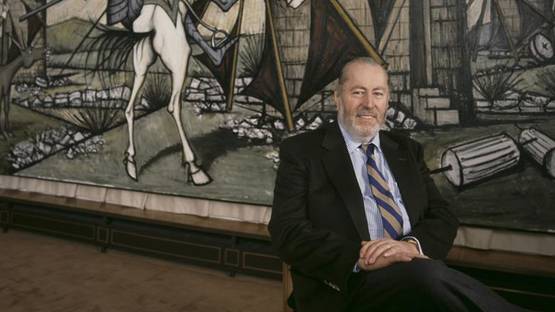 Bernard Buffet was a French artist who belonged to Expressionism, famous for his rich body of work in painting, drawing and printmaking. Bernard Buffet was born on July 10, 1928 in Paris – the city where he grew up and spent majority of his childhood. He was never really keen on education, which is why he was suspended from Lycee Carnot in Paris in 1939. His talent, however, was undeniable, and it was recognized by École Nationale Supérieure des Beaux-Arts (National School of the Fine Arts) which he started attending in 1943 when he was only 15 years old. For two years, he had been studying under the mentorship of Eugène Narbonne in Narbonne’s studio, along classmates Louis Vuillermoz and Maurice Boitel. He again dropped out in 1945 and moved with his mother to Brittany.

The years that followed witnessed the talented Buffet’s breakthrough into the world of art. At the “Salon des Moins de Trente Ans” at the Galerie Beaux-Arts, the showing of Buffet’s first self-portrait took place in 1946, and by the next year, he had exhibited L’homme accoude at the “Salon des Independants” (of which he became a member) and had his first solo exhibition at the “Art Impressions” book shop in Paris. This exhibition proved to be crucial in Buffet’s career, as his painting Nature Morte au Poulet was sighted by Raymond Cogniat, who purchased it for the Paris National Museum of Modern Art. The show also caught attention of Pierre Descaruge, who was compelled by Buffet’s work and became the artist’s greatest supporter. Later on, he included Buffet in the “Presses Litteraires de France”. 1948 was Buffet’s milestone year. He entered into a contract with Emmanuel David’s gallery “David et Garnier”, which opened the door to world scene for Buffet, gaining him international recognition. That same year, he received the Prix de la Critique award at the “Galerie Saint-Placide”; he was only 20 at the time. Later in 1948, his painting La Ravaudeuse de Filed was featured in the exhibition at the “Salon d’Automne”.

From this point on, Buffet was moving a lot. Until 1951, he lived in a friend Jean Giono’s house in Manosque, when he moved to Nanse, only to stay there for three years. In 1955, he again relocated in Domont, and the next year, he went to the Chateau l’Arc near Aix-en-Provence, where he lived till 1964.
During this time, his work had been exhibited extensively. Since 1949, he had exhibitions every year at the “Galerie Douant-David”, the “Galerie David et Garnier”, and “Galerie Maurice Garnier”. In 1952, a series of themed exhibitions started, and there have been 52 shows so far. Listless figures and visions of great violence were a part of the shows, especially early ones which rendered him infamous among his contemporaries, but had also brought him in the spotlight of art in France and the world. In 1955, Buffet was featured in the “Connaissance des Arts” magazine’s list of the top ten post-war artists, ranking at number 1. Three years later, the New York Times included him in the list of “France’s Fabulous Young Five”; a list where his contemporaries, such as Yves Saint-Laurent, were included. 1958 was also the year when his first retrospective exhibition was held, at the Galerie Charpentier; he was 30 at the time. In December, 1958, Buffet married Annabel Schwob, a French actress and writer. They had three children: daughters Virginie (1962) and Danielle (1963), and a son Nicholas (1971). They moved to Brittany in 1964, where they resided until 1970.

Bernard Buffet was appointed the Legion of Honours by the Académie des Beaux Arts in 1974. The French postal administration asked him to design a stamp illustrating “l’Institut et le Ponte des Artes” in 1978, and later on, the Post Museum housed a retrospective of his work. Buffet moved to Normandy in 1980, and then again to Domaine de la Baume in 1986, where he resided with his family until his death.
Buffet was diagnosed with Parkinson’s disease late in his life. The illness finally made it impossible for him to create, which drove him over the edge. On October 4, 1999, Buffet committed suicide in his home, at the age of 71. He suffocated by putting a plastic bag over his head and taping it around his neck.

Even though Buffet was primarily a painter, he also did some work in lithography, sculpture and engraving. Themes of his paintings were numerous; he painted portraits, still-life, religious works and landscapes. His bleak and harsh, yet emotionally charged images depict sad, lonely and detached figures; they are “ugly”, but somehow still appealing. The gloomy colors he used, primarily the different hues of gray, black and green, make his pictures appear crude. For his La Passion du Christ themed series, he painted Deposition from the Cross, which is now a part of the Vatican’s gallery. The piece was originally done for the Chapelle de Chateau l’Arc. Buffet’s pieces of Paris, made in cubist style, contribute to his extensive body of work, amounting to over 8,000 paintings, drawings and lithographs. By using the seemingly brutal straight lines, Buffet manages to convey the simple, but still complex and beautiful Paris. As Buffet developed his expression through his career, his style had stayed more or less the same. However, landscapes became the main focus in the later part of his career.

Bernard Buffet lived and worked all over France. He died in 1999.

Images copyright of the artist