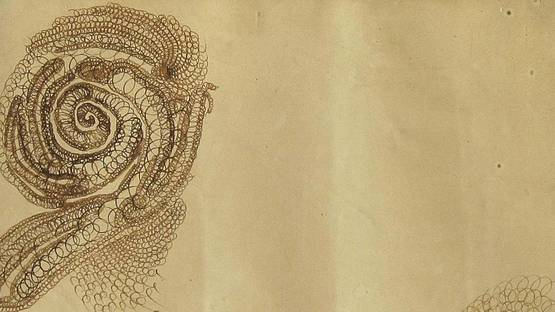 For Bernard Requichot, who died in 1961 at the age of 32, writing goes along with painting, making collages, assembling, while remaining genuinely autonomous. His writings are not mere comments or considerations on his art. Neither are they manifestoes meant to assert his place in the art world, to situate his practice in relation with that of his contemporaries. His writing took on a variety of forms and unfolded at the same time as his artistic activity: an unfinished novel, Faustus, poems, an undated journal and scattered texts. Gestural, spontaneous and sometimes abrupt, Réquichot’s depiction of the world is all the more vibrant for it. His spiders, traces of graphite on paper, seem as though they were coming alive with an animal spirit, the spirit of the world.