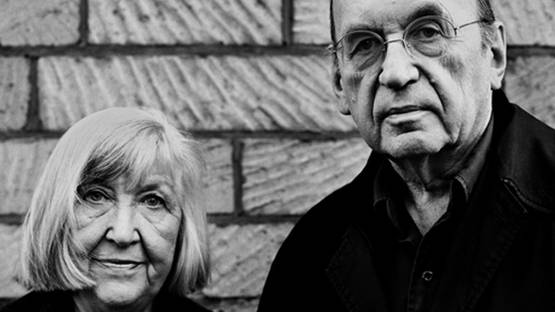 Bernhard Bernd Becher and Hilla Becher Wobeser were German conceptual artists and photographers working as a collaborative duo. They are best known for their photographs of industrial archetypes, such as water towers, pitheads, and coal bunkers and extensive series of typologies, often organized in grids. As the founders of what has come to be known as the ‘Becher school’ they influenced generations of documentary photographers and artists. They have been awarded the Erasmus Prize and the Hasselblad Award.

In the mid-1970s, they taught photography at the Kunstakademie Düsseldorf, in Germany, and their students, who adapted the style of the Bechers, became known as the Düsseldorf School of Photography. Bernd Becher was born in the Siegen and studied at the Academy of Art in Stuttgart and Düsseldorf. Hilla Becher, born in Potsdam in 1934, also studied at the Academy of Art in Düsseldorf and met Bernd while they were both studying painting.

The Bechers began working together in 1959 by photographing constructions related to industry and mining, some of which were on the verge of disappearance. Their photographs present these structures as landmarks that could be preserved as architectural heritage. The gelatin silver prints are usually grouped according to the type of structure, and are arranged in grids on the gallery wall. Together, the Bechers went out with a large 8 x 10-inch view camera and photographed these buildings from a number of different angles, but always with a straightforward "objective" point of view. They shot only on overcast days, so as to avoid shadows, and early in the morning during the seasons of spring and fall. Objects included barns, water towers, coal tipples, cooling towers, grain elevators, coal bunkers, coke ovens, oil refineries, blast furnaces, gas tanks, storage silos, and warehouses. At each site the Bechers also created overall landscape views of the entire plant, which set the structures in their context and show how they relate to each other

Noted photographers such as Andreas Gursky, Thomas Ruff, Thomas Struth, and Candida Höfer have all been students of the Bechers. In 2004, the Bechers received the Hasselblad Award. Their work has been exhibited at The Museum of Modern Art in New York, the Kunstverein Munich, and the Palais des Beaux Arts in Brussels, among other institutions.

Bernd Becher  died in 2007 and Hilla Becher currently lives and works in Düsseldorf.