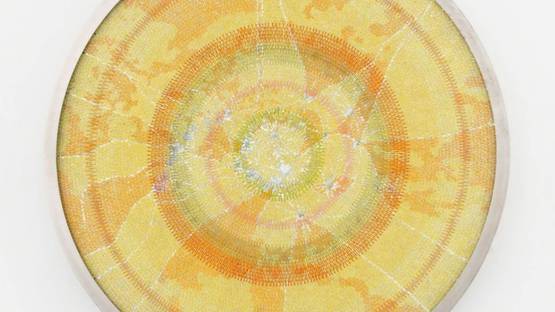 A British-Indian contemporary artist, Bharti Kher is widely known and appreciated for her work in painting, sculpture and installations. Throughout her two-decades-long practice, she has displayed an unwavering relationship with surrealism, narrative, and the nature of things.

Born in 1969 in London to Indian parents, Kher studied at Middlesex Polytechnic, Cat Hill, London, UK and later graduated with a B.F.A in painting from Newcastle Polytechnic in 1991. At the age of 23, she moved to New Delhi, where she lives and works today.

Drawing from life and its daily rituals, Kher reassesses and transforms their meaning to yield an air of magical realism. Her working process is exploratory, including surveying, looking, collecting, and transforming, as she repositions the viewer’s relationship with the object and initiates a dialogue between metaphysical and material pursuits. In her sculptures, she uses found objects that are witness to their own histories, assembling, juxtaposing and transforming them. She also uses bindi, an iconic personal affect of Indian women, to articulate and animate her themes, acting as a material, much like paint or clay, but with an inherent narrative. In her practice, she defamiliarizes them, making them seem both scientific and mystical.