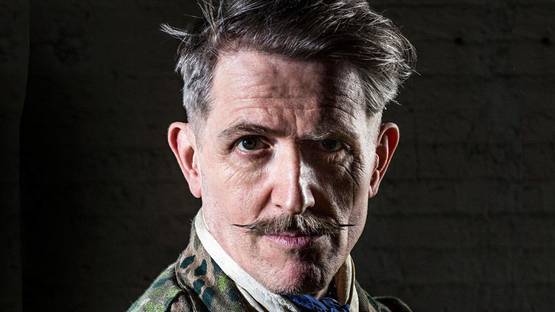 Billy Childish is a prolific British artist, punk rocker, poet, and novelist. Unconventional, rebellious, and controversial visionary, his body of work documents and explores his struggles coming to terms with addiction, abuse, and a childhood spent in a dysfunctional family.

Born in 1959 in Chatham, Kent, England as Steven John Hamper, while growing up in Chatham, with a brother and abusive father, Billy experienced a great deal of trauma. When he was seven, his father abandoned home, and Billy was sexually abused by a male friend of the family’s at age nine. Billy left high school at age sixteen, while struggling with undiagnosed dyslexia, and became an apprentice stonemason at the Naval Dockyard in Chatham. Initially denied an interview to the local art school, he produced over 600 drawings that gained him entry to St. Martin's School of Art. Childish's defiance to authority led to his eventual expulsion from art school in 1981. Childish then embarked on an artistic odyssey exploring a broad range of worldly themes including war, history, and social protest.

Childish’s art forms consist of woodcuts, collages, paintings, and Pin-Hole Camera photography. His paintings are created using etching, watercolors, oils, charcoal and sketches. Advocating amateurism, and free, emotional expression through art, Childish does not believe in the need to prove oneself with a title of professional artist. He feels that amateurs produce art through love, and professional artists produce for wealth.

Billy Childish uses worldly themes for his art. War, social protest issues, history, religious philosophy, sexual abuse, and alcoholism are a few of his most predominant themes. These are themes which are very personal to Billy, as he battled alcoholism for fifteen years. In his paintings of erupting volcanoes, pastoral scenes, and portraits of musicians and mountaineers, ominous skies and shadowy figures seem to swirl across the canvas in an Expressionistic manner and emotional intensity, recalling the paintings of Vincent Van Gogh and Edvard Munch.

A co-founder of the Stuckism art movement with Charles Thomson in 1999, Childish promotes figurative painting as opposed to conceptual art, and a quest for making art a part of personal discovery. The group was strongly pro-figurative painting and anti-conceptual art. Childish wrote a number of manifestos with Thomson, the first of which contained the statement ‘Artists who don't paint aren't artists.’ Although he had an early and close association with many of the artists who became known as YBA, Young British Artists, he has resolutely asserted his independent status.

Over the last 35 years, Childish has gained a cult status worldwide. In addition to writing and publishing over 40 volumes of confessional poetry and 5 novels, Childish has recorded over 100 LPs and painted many hundreds of paintings. Billy Childish has had solo and group exhibitions internationally with recent solo exhibitions in New York, London, and Berlin.

The artist lives and works in Kent, United Kingdom.