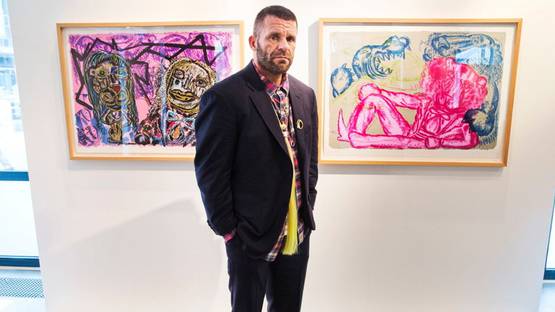 Bjarne Melgaard is a Norwegian artist currently based in New York. Creating paintings, sculptures, and sensory installations, the artist examines psychological angst and taboo-bending subcultures. Always following his mind, wherever it wanders, Melgaard’s work ranges from the 12-foot-tall Pink Panther smoking a meth pipe to the dystopian dollhouse teeming with handmade figures getting high, having sex, and contemplating suicide.

Born in Sydney in 1967 to Norwegian parents and brought up in Oslo, Melgaard studied at the Rijksakademie in Amsterdam and the Academy of Fine Arts in Oslo, and subsequently at the Jan van Eyck Academie in Maastricht from 1992 until 1993. He represented his country in 2011 at the Venice Biennale with Beyond Death: Viral Discontents and Contemporary Notions about Aids.

Melgaard started out in the mid 1990ʼs with a neo expressionistic, frantic manner of work. His intense way of almost attacking the canvas with paint paired with a total control of the line where the brush strokes and splashes of paint forms a base for an explicit and sometimes offensive narrative.

His art deals with the dark side of humanity, such as self-destruction, deviant sexuality and odd religious beliefs, often taking inspiration from various provocative subcultures such as S&M and Heavy Metal music. It provides an insight into parallel worlds that exists alongside the world of normality. Through his work, Bjarne discusses, investigates and pushes the boundaries of societal acceptance. What distinguishes Melgaard is that his work doesn’t rely on scale, high production costs, obvious symbolism, hipster hieroglyphics, or post-adolescent sexuality.

Racist or Not?: Controversial Chair

Melgaard’s most famous work, Chair created in 2013, is an appropriation of a similar Allen Jones piece from 1969, which featured a white woman. Even back then it was controversial - feminists attacked and damaged it as a symbol of patriarchal repression. Unlike Jones’, Melgaard’s polyvinyl sculpture features a contorted black woman. The artwork sparked controversy when it appeared on a fashion website, with magazine owner Dasha Zhukova pictured sitting on the cushion. After immediate response and angry accusations of racism, the picture was withdrawn.

His exhibitions are dense installations packed with paintings, sculptures, readymades, photographs, and contributions from friends working with art, design, or literature. During his career, Melgaard has had more than forty-five solo exhibitions in leading galleries around the world. His work has been seen in numerous group shows and at international art fairs. In addition, he is also a frequent curator and collaborator, has written more than a dozen novels, and produced seven films.

During the years, his artworks have been included in the permanent collections of major international museums – Museum of Modern Art (MoMA) in New York, MOCA in Los Angeles, the Stedelijk Museum in Amsterdam, the Musée d’Art Moderne et Contemporain in Strasbourg and the Moderna Museet in Stockholm, just to name a few.

Bjarne had his first one-man exhibition in 2000. The show, held in New York, featured sculptures of apes engaged in explicit sexual acts, causing a huge public stir. Known for his unusual acts, he included two live caged tiger cubs in his show at the Lower East Side gallery Ramiken Crucible, in 2012. Since then, the artist has taken part in many collective and solo show, including his participations at the Venice Biennale in 2011, Lyon in 2013 and most recently, Whitney Biennial in 2014.

Held in 2013, Ignorant Transparencies is one of the Melgaard’s most important solo exhibitions. The show included paintings, drawings, films, text and sculptures and consisted of three separate gallery spaces, each telling a different story.

At the center of the first gallery stands a 12-foot-tall representation of a top-hatted, crystal-meth-smoking Pink Panther slathered here and there with thick paint. As Melgaard’s alter ego, the Pink Panther appears in various guises and sizes as both predator and imp. Besides, a mural on one wall has the blurry image of an approaching woman above big, white letters spelling, You are a monster sometimes.

Melgaard's Dystopia at the Whitney Biennial

For the 2014 Whitney Biennial, he contributed a room-size lounge populated with sex dolls and furnished with sofas alongside sculptures of deranged faces, creating an atmosphere charged with sex, violence and societal ruin. Melgaard intends for his installation to communicate the effects of what some scientists call the Anthropocene, a new geological age created by human activity, especially through global warming.

Installation view at the Whitney Biennial

He proposes that our collective psyches have been abused and damaged in much the same way the environment has, resulting in sadism and an utter disregard for humanity. Projected on the wall are videos and images that Melgaard sourced from the so-called deep web - nightmarish video shot from real life, cult behavior, torture, genocidal attacks, scenes of mass suicide, war and terrorism. Overall, the installation reflects back the dystopian image streams that we ordinarily choose to ignore, forcing us to confront what Melgaard sees are the symptoms of civilization’s decay.