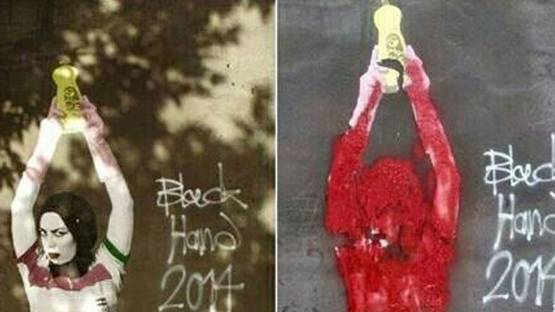 Black Hand is known for his stencil art, which is being used to comment on sexism in Iranian society, on the (legal) trade of human organs and on the political events in the Middle East. In an interview with The Guardian Black hand explained, "The public has a right to see the art. I chose street art because I want to guard against the galleries’ monopoly. Our intellectual and artistic society are underestimating and ignoring ordinary people’s power." Black Hand's graffiti is political and not state-sponsored. By remaining anonymous because of Iran's municipality laws, makes his unofficial writing or advertising on walls illegal.

His signature tag is becoming famous in Tehran, where his graffiti is quickly captured on mobile phones and spread via Twitter or Instagram, both officially banned in Iran. He can also be surreal in his sense of humor. One graffiti simply reads: “Based on article 92 of municipalities regulation unauthorized advertisements and graffiti is illegal. Signed Black Hand.”

Black Hand’s exhibition uses the rooms in the condemned but beautiful house to explore the social themes that engage him.
For example in one of the rooms, called the Shirin (sweet) room, every object is printed endlessly with its own name, the sofa, the framed painting, the table, the cigarette box, the lighter and the dresser, and a harsh strobe light completes the nightmare. Black Hand seems to suggest that we live in a society where everything introduces itself by labels with no regard for content and meaning. As in the famous painting by Belgian painter René Magritte, The Treachery of Images, in which a pipe is labeled "This is not a pipe", a dresser can easily be not a dresser and even the house can be a piece of land destined to become a high-rise. In contemporary Iran the label can be changed quickly and the form can remain without content.

Black Hand's critique here is multi-layered, he seems to be challenging the commercial art world success of Iranian contemporary art, suggesting that its core is hollow.