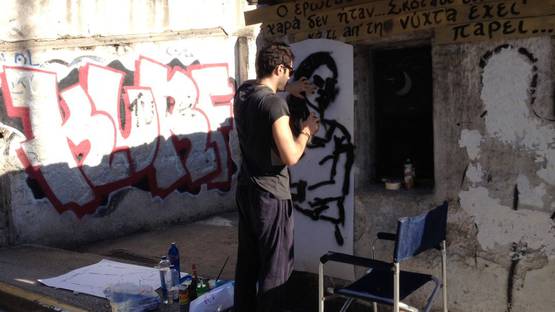 Bleeps.gr (or Bleeps) is the pseudonym used by a Greek artist and his crew. Bleeps creates political Street art, paintings, installations and he is involved with the artivism movement. Most of his works can be seen in Athens, but a number of others can be found in cities and rural areas around Greece and Europe. He creates conceptual paintings in the public space using a combined technique. This involves materials used by traditional painting as well as ones of street and graffiti art.

“My art has been described as artivism (a portmanteau word combining "art" and "activism".) but I tend to avoid strictly characterizing and categorizing what I do.”
His intention is to examine conventions and the status quo related to the social classification and ethical standards. Philosophically through his art he creates an alternative interpretation of the present linking it to the past thus aiming at educating the viewer either on the street or in the social media like the internet.

From end of 2003 till 2007 Bleeps lived in UK where he worked and followed further studies and research. During that period he was in Bristol and he got involved with the local art scene and influenced by the street art boost.

In 2007 he returned to Athens, Greece.” I started doing street art although I was on and off travelling. My first pieces had strong influences by the Bristol scene although politically orientated. Gradually I built my own style and “broke” the bond with the UK street art style.”

In 2010 several mass media got interested in covering articles about Bleep’s work and in 2011 it left the boundaries of Greece with the first major photographic cover by the Guardian.