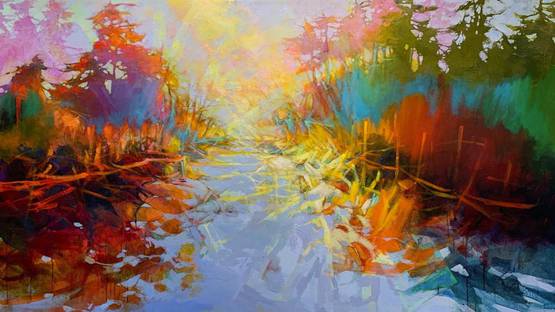 Blu Smith is a Canadian contemporary artist who was originally creating figurative works but has since shifted towards abstraction. As a young man, he worked as a commercial artist and sign painter, mastering precision and accuracy in painting. However, as he began maturing as an artist and adopting abstraction, these attributes became restrictive. Releasing himself from the technical restraints of realism, his non-representational work became a creatively freeing direction that evolved his unique voice as an artist. Smith’s subject matter is based on organic shapes with strong ties to nature, balanced with cavernous spaces that are filled with light so as to glow with an atmospheric quality. His work is about the diversity of two different states, while his real interest lies in bridging the gap between structure and space, foreground and background. Blu Smith lives on the west coast of Canada.