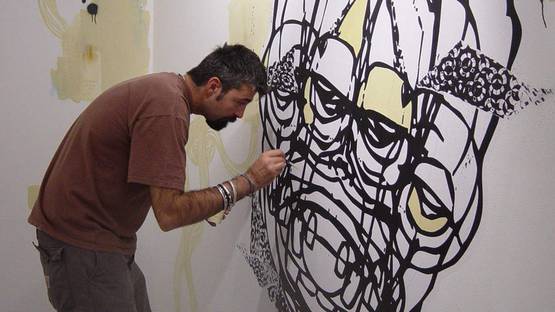 Bo130 is an Italian contemporary artist born in Milan in 1971. He is a street artist, illustrator, graphic designer, writer, but has also worked in animation and web design. Labeling his work never felt comfortable, as he does what he does because he likes to find different ways to visually describe things that inspire him.

He studied Art and Design at Central Saint Martins, University of the Arts, London, UK, and Graphic and Media Design at London College of Communication. During those years spent in the capitol of England, Bo130 met Microbo, and they established a life-changing artistic and personal collaboration. They returned to Milan in 2000, and at the same time, both hit the streets with their posters, stickers, stencil and freehand drawings.

The artist is inspired by music of Sun Ra and his Astro Intergalactic Infinity Arkestra, Herbie Hancock, A Tribe Called Quest and the Soundtrack of Experimental Beathead Jams. He particularly enjoys cinematography of Terry Gilliam, Spike Lee, Quentin Tarantino and Robert Rodriguez. Trapped in the world of graffiti since 1985, the artist is known for experimentation with different techniques, from painting, stencils, stickers, to markers, all in order to transcribe what inspires him into images which range from urban style, music, food, graffiti, etc. He has exhibited throughout the world, often with his partner Microbo.