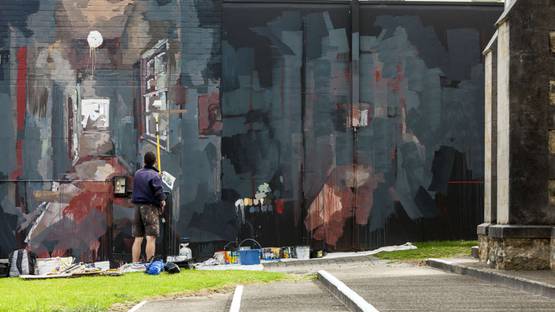 Gonzalo Borondo was born in a Spanish city Valladolid, but very soon went to live in Segovia. At fourteen, Borondo moved to Madrid where he attended the Art School and the Academy of Fine Arts. He graduated in IES Margarita Salas Madrid and continued his fine arts studies in Madrid Complutense University. In 2012, he spent some time in Rome, Italy for an Erasmus cultural exchange program at Accademia di Belle Arti di Roma. Madrid is the place where he actually began doing graffiti tags all around the city, as well as the classic bombing on trains, his works of puppets - which decrease the letters and increase the drawings - but it soon became clear that this is not expression mature enough for his artistic language. Thanks to his teacher Jose Herranz Garcia, Borondo had the opportunity to learn and experiment with new techniques. He worked with charcoal, oil and tempera, experimented with new ways of expression just to be closer to the understanding that for the best gallery for him - is the street.

The element that distinguishes Borondo from other street artists and is instrumental to his artistic development and research of their own language is to be found in his biography. His father was a restorer and Gonzalo grew between classical paintings, perfect proportions, faces cerulean, draperies and landscapes that have shaped its final taste. His tormented characters that first decorated the walls of Rome and Madrid gained him international recognition.

Today, his murals utilize sweeping, expressive brushstrokes that demonstrate little restraint. Borondo is unafraid of dripping paint, thickly stabbing earth tone hues on walls for his contemplative portraiture. He is reinventing street art by using an original method of “glass scratching,” inspired loosely by the recent economic crisis. ”Where the crisis strikes, you will notice many shops that are either closed or empty. If you scratch the window slightly you will suddenly be able to see the inside of the shop. I find that quite poetic, glass has something beautiful about it. Sometimes I like to do the opposite of that. I apply black paint on commercial spotlights and by scratching the paint off the spotlight, I allow light to pass through.” As Borondo himself says: "The glass has something that other materials do not have. It is fragile but strong at the same time. It is a mystery that I still have not been able to understand."

In one of his installations in Norway, Borondo created a bewildering exploration of light and shadow using the scratching technique - where the viewer could see a skull or a woman’s body, its shadow would reflect a man’s face or an intricate circulatory system. Challenging perception and perspective has come to define Borondo’s work.

Borondo prefers large sizes, but not for the usual reason of street art "is the greatest work more people can see it," but to a greater sense of freedom. In the large format is implied throughout the body, and the extreme brutality is the primordial act of creation wider. Watching these paintings manifest is a process to behold. What starts life as handheld sketches, quickly transform into multi-storey murals. Each expressive stroke is so great that the artist resembles a creative force willing its consciousness into the paint. His truth laden aesthetic takes its influence from the great Spanish master, Francisco Goya. Like Goya, Borondo emphasizes meaning behind the art. His use of hay to canvas portraits of farm workers long forgotten has re-imagined their importance on the toils of their labor. Using corners once again, the viewer steps back to fully recognize its place in the natural environment. Borondo aims to create something far from the Pop Movement and its codes. His characters have a ghostly quality, they are present without being overbearing, and merging with their environment perfectly.

From Ecce Homo to Animal

In 2005, just seventeen years old, Borondo exhibited for the first time at the Palacio de la Floresta in Segovia at an exhibition of a painting titled Ecce Homo in which the protagonist was the human figure. The event was very successful and all the pieces were sold out. His first solo exhibition was "Hole of Fame" at the gallery Deus Maquina in Madrid in 2012, and the second is "Isterofimia" at 999 Gallery in Rome in the same year. For his solo show at Itinerrance Gallery in Paris in 2013, Borondo produced a series of large pieces from found materials and doors featuring his unique classical aesthetics imagery. Since then, he has been exhibited worldwide.

Among Borondo’s recent projects are Las Vegas festival Life Is Beautiful Festival in 2014, where he added an installation and dope mural to the desert event. Since then, Gonzalo Borondo has stayed busy and opened and for the first time also curated a solo show at a RexRomae Gallery pop-up in London titled “Animal”, choosing the concept and selecting the artists to involve, with the support of RexRomae and Just Kids. In this project, Borondo aimed to explore the conflict between our innate animal instincts and our present lives, which are coated with the dependence of technology and our fear of what is unknown. His work is poetic and evoking, inciting the public to pause and reflect on their own mortality — their memento mori — leaving all vanities and mass-media-influenced notions behind. “The biggest part of my work [is to] try to reflect our dramatic nature. I use the universal body language to show the issues of the human condition.”

Using the large 3200 square feet space as separate exhibition spaces, Borondo created a path through its mind which enclosed 8 different ambiances including collaborations with fellow artists. Borondo is quite a secretive artist, he does not like social media and exposure. And he loves working surrounded by his friends who are family to him. For this exhibition, he has decided to collaborate with his friends artists Despina Charitonidi (Greece), Carmen Main (Spain) and Edoardo Tresoldi (Italy). Their alchemy and togetherness are palpable. Each of them is an accomplished artist. Each of them has his own distinctive style and individuality. And they all understand each other so well that they manage to create a coherent and powerful body of work which melts into Borondo’s world. Together, they unveiled an impressive body of work which cleverly used and mixed different mediums, techniques, and performances including a naked pregnant lady in a cage, a 4 meters high haystack installation or a clever video installation all relating to the Animal theme.

The Memento Mori art book marks an impressive debut for Borondo into the world of art books. The Yard Press published and produced by Chiara Pietropaoli and Chiara Capraseccaart, book has been created from the archives of Borondo himself and gives us a genuine insight into the artistic processes of the acclaimed street artist. Memento Mori comes from his need to fix in a book what has been, in order to continue with what it will be: in this book the artist lets us discover himself in complete freedom and honesty, opening the doors of his archive and showing an unknown part of his work, which represents indeed the heart of all his artistic production: the research. Sketches, drafts, photographic references, all produced by the artist himself and collected during those last years. Photos were taken all along his travels and on the roads, he walked on, or by who walked by his side. All the volume tells us about Borondo’s creative process and artistic work, since the beginnings until 2014, also through four essays by Edoardo Sassi, Simone Pallotta, Carmen Main and James Buxton.

Featured image: Borondo - Intervention in Albany (AUS) for PUBLIC 2016 (detail), photo by Bewley Shaylor
All images used for the illustrative purpose only