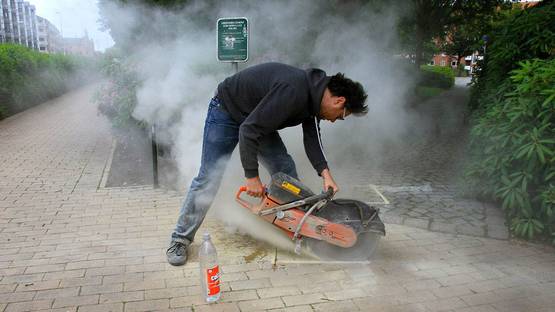 Throughout the art history, the installation has been approached in various ways, yet Brad Downey tries to examine the possibilities of media by using it as a tool for a social comment. Namely, by carefully selecting and using objects in an unconventional manner, often in an urban environment, the artist questions their inherent function though his works are a temporary disruption, sometimes remaining in place for as short a time as a few minutes. So, by re-arranging these materials into the novel, inventive, and incisive new forms, Brad Downey not only detaches them from their original context but also forms artworks that are exhilarating, subtle, comic and very often provocative.

Brad Downey was born in 1980, in Louisville, Kentucky. He earned a fine art master’s degree in painting and sculpture from the Slade School of Art, where he studied under Bruce Mclean. Pratt Institute drew him to New York City in 1998. In 2007, Downey was awarded SEEDA Arts Plus award for a commission with the Tour de France. The artist has exhibited in venues such as the Tate Modern, the ICA in London, and Mass MOCA in the USA, Peacock Visual Arts in Scotland, Kunsthalle Dominikanerkirche in Osnabrück, Kunstcentret Silkeborg Bad, in Denmark.

The appropriation of ready-made methodology

Downey is well-known for his installations around the world and his works are often reminiscent of Duchamp’s ready-mades or Minimalist sculpture, even Land art. For example, his public work from 2013 titled Fountain is made out of an old rusty bike which was mounted on a rusty bicycle rack and transformed into a fountain. Water from the nearby canal is channeled through the frame and out of the handlebars back into the canal. In 2016, the artist realized urban intervention/ performative action The Fathers of The Nation in Bishkek, where he decided to decontextualize the ruined monument by inserting real people instead of the bronze statues which were stolen.

In 2008, Downey sprayed green paint on the shopping windows of Berlins historical KaDeWe mall, which the owners reported to the police as an act of vandalism. As a matter of fact, the artist was contracted by the Lacoste clothing brand for an exhibition at the mall celebrating the 75th anniversary of the brand. Unfortunately so, after the action Lacoste erased the name of the artist from the exhibition and never paid him for his participation.

The interest of changing the meaning of objects is apparent

The Domains of Art Practice of Brad Downey

Besides installation and urban interventions, Downey was interested in film, so he raised the funds and shoot his first feature-length film, Public Discourse. It is a documentary about street art which gained success and was screened around the world including the Institute of Contemporary Arts in London and the Copenhagen Documentary Film Festival. The ongoing activity of Brad Downey seem to develop rapidly, and the urban space remains his studio so the immediate participation and the transformation of ephemeral moments make his art practice in perfect balance with everyday politics and life.