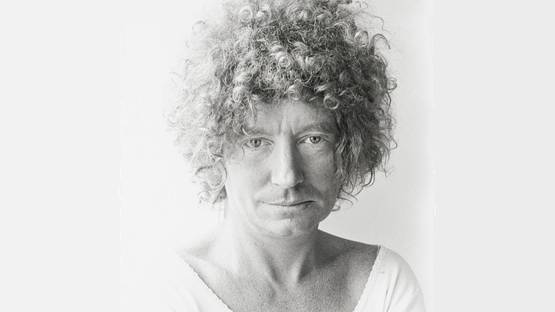 The whole opus of Brett Whiteley represents astonishing and prolific journey into the depths of human psyche. The intensity of colors, unusual composition, and selection of motifs suggest the artist’s superb draftsmanship. Nevertheless, in order to understand the conceptual side of Whiteley’s work it is necessary to enter the realm of esotericism and higher state of consciousness. By letting himself loose from any proposed frame, in sense of art and life, the artist tried to examine various phenomenon’s and express them through the paintings.

The Rise of An Artist

Brett Whiteley was born in 1939, in Sydney. He was educated at The Scots School, Bathurst, and The Scots College, Bellevue Hill. Afterward, he studied at the Julian Ashton art school in Sydney and spent several months in Italy on a traveling art scholarship. In 1961 in London at Whitechapel Gallery, Brett Whiteley showed his works within the Recent Australian Painting exhibition and became recognized immediately. The Tate Gallery purchased his Red Painting from that exhibit, making him the youngest artist so honored by the gallery.

Searching For The Authentic Expression

The artist was severely influenced by his mentor Francis Bacon, so he even his portrait in 1972. At the beginning, Whiteley’s works can be categorized as abstract, but gradually he transferred to more figurative Expressionism. From the London paintings inspired by the British mass murderer John Christie, over Expressionist landscapes, to psychedelic lyrical abstraction, over the years Brett Whiteley has shifted through various styles but has remained loyal to his peculiar sense of crossword composition and coloring. He even managed to fuse the perspective of Asian aesthetic with a European sensibility to create a unique floating sensual landscape, with birds, nests, trees, rocks, and rivers inhabiting the world founded on a place and set in imagination and feeling.

Brett Whiteley was constantly shifting from abstraction to figuration and back

During that period, Whiteley painted works in several different series: bathing, the zoo, and the Christies. The influence of modernist British painters of the 60’s William Scott and Roger Hilton is rather notable in those works. The bathings are actually portraits of his wife Wendy in a bathtub from behind. In 1964, as it was mentioned, Brett Whiteley became fascinated by the murderer John Christie, who had committed murders in the area near where Whiteley was staying. Therefore, a series of paintings based on these events were created reveling Whiteley's intention to subtly portray the violence of the events. Depictions of the animals at the London Zoo were also created in this period.

The fascination with old masters is notable

The Journeys of Brett Whiteley

Despite apparent curiosity, his work was not modified until his transfer to America and several other journeys. In 1967 Whiteley won a Harkness Fellowship Scholarship to study and work in New York. Out there the artist became affiliated with a peculiar art circle around the famous Hotel Chelsea, especially with musicians Janis Joplin and Bob Dylan. Naturally, Whiteley was in accordance with the sprite of the time and became involved with the peace movement, so his works generated those ideas of togetherness, solidarity, and pacifism like his iconic painting The American dream. The movement largely embarked the drug counter culture in order to set free from the conventions and broaden their horizons. Whiteley often used psychoactive substances, sometimes more than his body could handle.

Perhaps one of his best-known works is the one titled Alchemy, realized in between 1972 to 73. Interestingly, it was used for the cover of lice album of famous rock band Dire Straits. The work itself was composed of many different elements and on eighteen wood panels, and by reading the whole from left to right it begins with an exploding sun from a portrait of Yukio Mishima that Whiteley had started but never completed. Namely, Mishima committed seppuku, a traditional Japanese form of suicide, so the image of him is reminiscent of final vision of enlightenment in the form of the exploding sun. For the production, Whiteley used various media from feathers and part of a birds nest to a glass eye, shell, plugs, and brain in a work that becomes a transmutation of sexual organic landscapes and mindscapes.

An interest for obscure, hidden and peculiar aspects of human psyche

The art of Whiteley is rather complex and compelling, and various influences and inspirations can be traced with an intense urgency, thirst, and passion. In the late 1970s, Brett Whiteley won the Archibald, the Wynne and Sulman twice – the most prestigious art prizes in Australia, and was made Officer of the Order of Australia in 1991. His works are both by private and corporate collectors and public museums, and what’s left tends to be smaller, lesser paintings, works on paper and sculptures. Interestingly, Whiteley appears as a character in the book Falling Towards England by Clive James under the name Dibbs Buckley. Sadly, the artist died in 1992 from a drug overdose in Australia. Nevertheless, the avant-garde practice of Brett Whiteley is an actual ode to the art of decadence and is an extension of activity of great minds like Comte de Lautréamont or Aubrey Breadsley.

Brentt Whiteley passed away in 1992, in Australia.