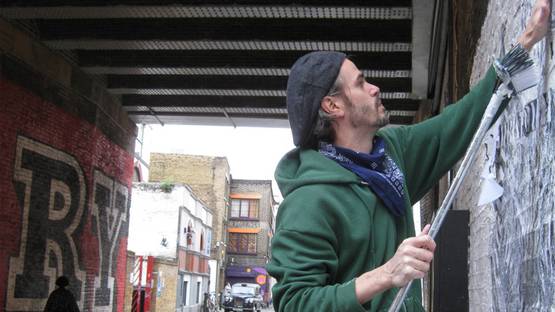 Brian Adam Douglas is a Brooklyn based artist who for the past five years has been pasting up his distinctive woodcuts in cities all over the world under the name Elbow-Toe. His work is often grounded in myth, symbolism and poetry and his distinctive style has gained him an avid following of enthusiasts both within street art and the wider art world. Douglas is one of a group of classically trained New York based artists who have chosen the street as the primary place to exhibit their work, finding the immediacy of doing so more liberating than the confines of the traditional gallery system. Douglas’s chief theme is portraiture and more recently has created a series of collages portraits. These intricate collages at first glance might be mistaken for paintings given that they have a fluidity rarely seen in collages. Whilst his work has a very definitely unique style it draws on a rich history of figurative painting and has qualities reminiscent of Lucian Freud and Francis Bacon. His moniker is ELBOW-TOE, a name taken when the hard surface walls of the city became his canvas. Brian offers up an assortment of elements for the viewer to enjoy. His energy and style is immediately seductive and naturally we want to look deeper. He already attracted a following from his street art. He enjoyed great notoriety and fame surrounding his work. It inspired him and making street art became a true passion for him. During this time Brian challenged himself at every turn, working to master techniques of painters he loved. Showing how this technique or that style was important to him to understand and be able to do it himself. Painstakingly he worked something over and over again to achieve the desired effect. Brian Adam Douglas is never short of ideas and he produced art at a terrific pace one that even surprises him when he thinks back to that time. It was simply so rewarding to him. Since that time he has produced a number of paper piece treasures. Initially the collages were tight and controlled and he felt they lacked the freedom and fluidity that is a signature of his art. His technique of collage is often perceived as painting instead of small confetti sized pieces of colored paper, deliberately placed to create these wondrous works. Often in Brian’s work there is a central axis where energy and motion swirl around. In large pieces it may be compositional, with many elements moving around an invisible axis or in the case of a portrait, the figure is pulled and twisting, like the smoke from a candle that twirls gracefully up and above a burning flame. He comes up with an idea maybe two, three or four ideas and how those ideas flesh out is where the joy of creation is born.  It keeps him striving for more and keeps his audience happy to see new work.