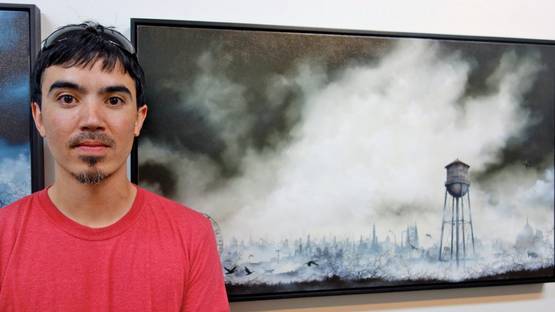 Brian Mashburn is an American artist, famous for creating amazing oil paintings of foggy landscapes, made with such precision and details. He shows the existence of the natural world, alongside the cruelty and destructive forces of industrialization. His paintings contain the elements of human architecture, as well as the beautiful scenery and backgrounds. The darkness seen in his imagery, remind of the 19th-century gothic landscape, but also give the impression of the contemporary and surreal, through mixing historical elements with cultural references and animals. The narratives used are both, subtle and catchy, universally acceptable and allegorical. The author likes to exaggerate in subject matter and style.

He is an artist who received BFA in 2002 at the University of North Carolina at Chapel Hill. The inspiration in his works is drawn from everyday observations and from his Asian-American heritage. Brian stresses the experience and knowledge that he gained while attending Chinese language lessons, where he originally started to have an interest in painting, and where he learned the strong work ethic. Furthermore, his journeys to China, Thailand, and Hong Kong have also left a mark on his work, especially the heavy mists of Appalachia and smog. Together with his interest in history, philosophy, and natural sciences, they shape the foggy aesthetics that characterize his style. His skills have mastered the process of transmitting the atmosphere of vulnerability and resilience to the viewer.

Mashburn depicts hyper-realistic scenery, permeated with fragments of wildlife in the foreground, usually positioned in contrast to the looseness of the distances. His works include animals like an owl, dog, buffalo, elephant that are discretely isolated. This leaves the impression of contextual disjointedness and abrupt displacement, thanks to the traces of human progress and development which is omnipresent. Author’s paintings are the evidence of the complexity and confrontations between nature and human, represented in a post-apocalyptic manner. Brian uses oil paint to make Dystopian cityscapes, characterized by the lack of humanity, yet the dense and foggy cities seen in the background of the artworks, confirm their existence. He shows the unearthly desolate worlds that are on the edge of chaos and collapse. The darkness and stubbornness remind viewers on the self-destructive path in which the modern society is moving.

Brian’s pieces suggest a much broader picture and story than the one that fits the frame. Desolate landscapes featuring different silhouettes ask the audience to focus on the composition. His exhibition called Axiom has been displayed in Thinkspace Gallery, Los Angeles, but his art was also shown at the Paradigm Gallery in Philadelphia.
He is represented by the Thinkspace Gallery.

Featured image: Brian Mashburn in front of his artwork - Photo via arrestedmotion.com
All other images courtesy of Thinkspace Gallery and the artist