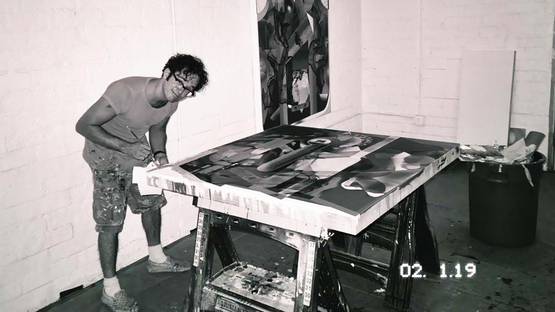 Britton Tolliver is a dynamic contemporary artist known for his large-scale complex abstract painting. Using a self-imposed set of rules, Tolliver serially moves between gestural painting and the superimposed grid, a mediation that enables both aesthetic choice and obliteration of the image, and opens the pictorial space to dynamic – while disorienting – new layers.

Born in 1976 in Kingsport, Tennessee, Tolliver received his BFA from East Tennessee State University in 2004 and MFA from Cranbrook Academy of Art in 2006. Solo exhibitions include Moonsick at Anna Meliksetian Gallery, Los Angeles, Fixed Illusion at GOLDEN Gallery, Chicago and The Search for the Sky Underneath the Dirt at Kinkead Contemporary, Los Angeles.

Traditional training at the Cranbrook Academy of Art, and an avid interest in art theory and critical writing provide a solid foundation for Tolliver’s artistic practice. Furthermore, Tolliver’s experience working for the Museum of Contemporary Art in Detroit stands as an important introduction to the artist’s historical influences and sophisticated sense of color and abstract compositions.

Early work from the artist explores geometric slices and angular lines, suggesting an infinite layering of planes—superbly demonstrated in Tolliver’s 2008 work Militant Kite Uprising. More recently, the artist’s work combines both gestural and geometric abstraction. Evident are conceptual references to Minimalism and Constructivism through Tolliver’s use of the grid, a structure that appears serially throughout many works.

In contrast to the formal structure of the grid—explored and defined in earlier sub-movements of Modernism—Tolliver’s interpretation is created in reverse. The artist forms this structure by masking off a detailed, multi-colored under-painting, which becomes the lattice of the framework. On this, Tolliver applies a layer of opaque monochromatic paint to create the network’s interior cubes. Any sense of the grid as a restraining device is deconstructed by Tolliver’s strident and gestural brushstrokes beneath the surface, creating a sense of movement and interrupting the grid’s regularity. Boldly confident, Britton Tolliver’s paintings subvert formal positions and open up new vistas.