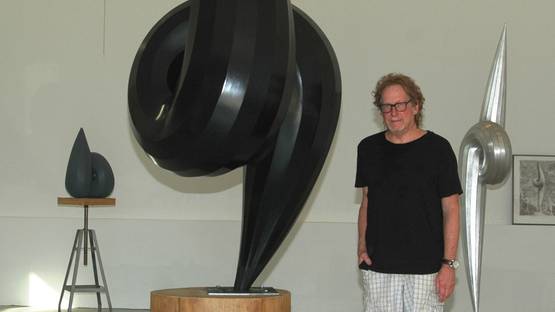 Bryan Hunt is an American sculptor who was born on June 7, 1947 in Terre Haute, Indiana. He moved with his family moved to Tampa, Florida in 1955. Hunt worked at the Kennedy Space Center as an engineer's aide and draftsman, in 1967 and 1968, during the NASA Apollo Program and the manned-mission to the Moon. In 1968, he moved to Los Angeles to enroll in the Otis Art Institute, where he received a BFA in 1971.

Hunt traveled to New York City and attended the Whitney Museum of American Art Independent Study Program in 1972. He then returned to Venice, California until 1976 when he moved to New York. In California, he had his first solo exhibition at Jack Glenn Gallery in Newport Beach in 1975, and soon after at the Clocktower in the New York City. Hunt's first solo show in Europe, organized by artist James Lee Byars, was Empire State, Phobos, Universal Joint at the Palais des Beaux Arts in Brussels. In 1978 Hunt was included in the Solomon R. Guggenheim Museum's Young American Artists. In the same year, Hunt's work Big Twist was installed in the Museum of Modern Art's Sculpture Garden. It was later loaned to the White House for a temporary installation in the Rose Garden, at the request of First Lady Hillary Clinton. Hunt's first commissioned sculpture was in 1979 when Edgar Kaufmann, Jr. asked him to create a sculpture for Frank Lloyd Wright's famous Fallingwater House, or the Kaufmann House, in Western Pennsylvania. He was included in the Whitney Museum Biennials in 1979, 1981, and 1985, and was featured at the 1980 Venice Biennale.

Hunt lived part-time in Spain from 1985 to 1991 in his home in Mojacar, near Almeria. In 1985 he was commissioned a sculpture by the City of Barcelona. In 1992 his FallLakeFalls, a public artwork, was installed at the Mori building, Shiroyama Trust Tower in Minato, Tokyo, Japan. In 2006, the New York City Parks Department commissioned an artwork, Coenties Ship, for Lower Manhattan at the historic Coenties Slip. The 20 foot high stainless steel and glass sculpture was awarded the New York City Design Excellence Award in the same year. In 2011, Hunt created and installed ten Waterfall sculptures on Park Avenue in New York City between 52nd and 57th Street. In 2014 Hunt was commissioned to create a sculpture, Axis Mundi, for the new One World Trade Center, New York.