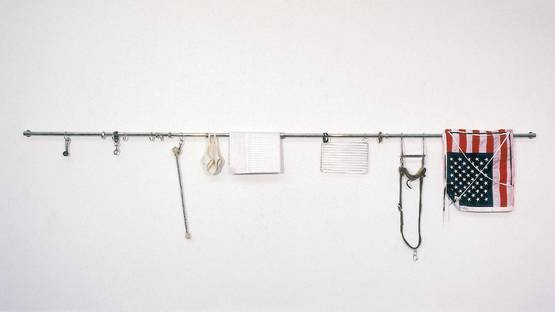 Cady Noland, born in 1956, is an American artist engaged in a mixture of Pop art and Minimalist sculpture and installation. In her work, Nolan examines the underbelly of the American psyche, specifically our fascination with celebrities, violence, and psychopathological behavior. She was born in Washington D.C. and attended Sarah Lawrence College in New York City. Nolan had her first solo exhibition at White Columns in New York City in 1989 and since then, has had her work shown all over the world, including at the 1991 Whitney Biennial and Documenta 9.

Artist uses everyday objects such as police barricades, tabloid photographs, and construction materials to explore the intersection between the fantasy and reality of American identity. Noland’s 1989 exhibition, Crate of Beer, at the Mattress Factory in Pittsburgh, PA, in which she set up scaffolding in front of stacks of Budweiser beer, illustrated her interest in exploring how the American dream is represented culturally. She has also worked extensively with the idea of celebrity and tabloids. In particular, her 1989 series Tanya as a Bandit and Untitled Patty Hearst, explored Patty Hearst’s celebrity status in relation to her criminal activity.

Noland believes the male psychopath is the ultimate example of Americans’ tendency to manipulate and objectify one another. She explored this notion in a series of sculptures devoted to Charles Manson. In Mr. SIR, 1993, silkscreen on aluminum, the man who sanctioned the murder of actress Sharon Tate cuts an enigmatic figure. Not Yet Titled (Bald Manson Girls Sit-In Demonstration), represents female members of Manson’s “family” seated in the street in protest during his trial. Noland incorporated the wire copy that accompanied the original press photograph into the work.

In recent years, Noland has forsaken mass-media imagery in favor of a more sculptural vocabulary. Beltway Terror, 1993–94, is a square of wood covered in smooth aluminum with five neat holes, resembling a pillory. Untitled, 1999, consists of a piece of plywood supported by a set of white plastic barricades as used by police. While both works echo Minimalist geometric formalism, they also continue Noland’s exploration of the dysfunction of American culture in their allusion to torture, public humiliation, and physical confinement.

She lives and works in New York.