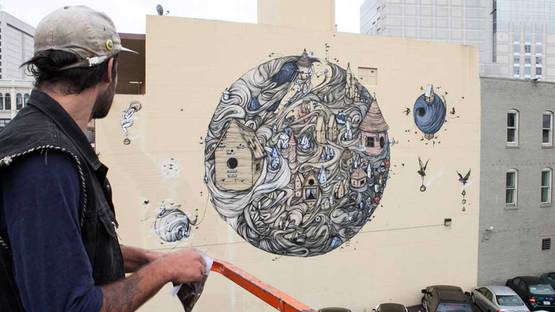 Cannon Dill is an American artist, best known for his murals done in a distinctive style – a pen and ink drawing with common themes such as spirit animals like wolves and coyotes.

Dill went to California College of the Arts to study printmaking, but – as he said himself – his career actually began the moment he started ditching classes. Cannon got involved and started regularly participating in the Occupy movement.

The posters Dill created in the name of this movement, titled Save your future and Fuck the police, had more than 10,000 distribution in Oakland only and many, many more- almost countless number printed from Occupy web page OccuPrint.org.

Cannon started to draw very early – he had an obsession over folk-tales and nature, and that fascination is still present in his work.

“The environmental undertones that are present in my work are just reflections of what I hope to see in the future.”

Dill generally sticks to large-scale work in black-and-white palette which are in fact a sort of recreation of his highly detailed pen-and-ink illustrations. Dill’s sketching is reduced to the minimum as he is more inspired when working in the moment. Working on murals allows this artist to interact with the city, people and weather as well, creating on the spot some specific elements for that artwork.

Cannon Dill’s work is mostly monochromatic. He is partially colorblind and in the past he had some attempts to work with colors – but he would always come back to black and white as he felt safe and comfortable working with it – it’s easier for him to concentrate and helps him focus on texture.

All images courtesy of Athen B. Gallery