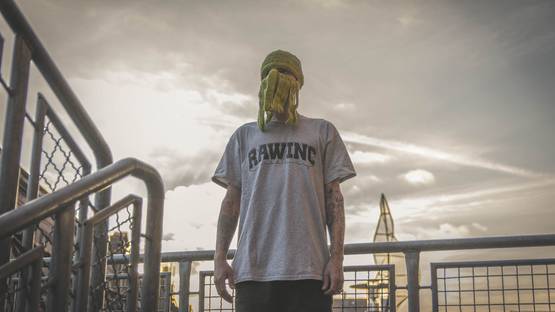 141.6 miles away from the sun, Carl Kenz saw the light of the universe. According to Kenz, life on Mars had nothing to do with the god of war. On the contrary, it was a wonderful life - organic, colorful, real. But one day, Kenz found himself quite confused on the planet Earth. At first glance, everything seemed to be even more alive and full of opportunities. But appearances were deceiving. It was only the idealized, artificially cleaned self-image of the society, which, at first, did not allow the indifference of existence and appearances.

The Martian realized quickly that the seemingly perfect world included more grey, as well as black and white thinking than colorful advertising posters from the industry, could ever oust. Every square mile of the urban jungle was economized and adjusted to functional demands. Only the World Wide Web offered a space of possibilities, but no dataflow shimmered as beautiful as water on Mars.

He found himself in a monotonous world, occupied by robot-like creatures. The transparent species called itself human. These beings had created a world for themselves due to technical progress which promised almost unlimited possibilities, but no one could use this chance. The human being did not seem to be ready yet. So the Martian saw the dictatorship of advertising and monitoring, imprisoned in a grey net.

In search of real life, Kenz came across something overwhelming in a contorted backyard. From now on, this should change his whole life. Bright colors and organic forms, as he knew them from his home planet, fascinated him at first sight. Graffiti. As from this day, he tries to bring his utopia onto the walls and canvases of this world in order to make it nicer and a bit more colorful. He realizes his Utopian places and thus constructs heterotopias aiming against the controlled and disciplinary society. He realizes this by picking up, questioning or reversing parts of the current culture and thus critically reflects the planet Earth. His humoristic surrealistic paintings often imply social criticism, which gives us food for thoughts.

But why tentacles? By using tentacles or tentacle-izm, the graffiti artist shows new perspectives based on a frightening and disgusting creature. A closer look shows that the tentacle is a lovable being. This way not only ideals of beauty are questioned but also prejudices are refuted. It shows the game of existence and appearances, reality and imagination, simulation and its antonym. “Everything you can imagine is real.” (Picasso) Even in his spare time, Kenz successfully lives out his affinity to water. He will soon qualify for the Olympics with his synchronized swimming group “Tent A QUAllen” and thus further popularize the Martian swimming team.