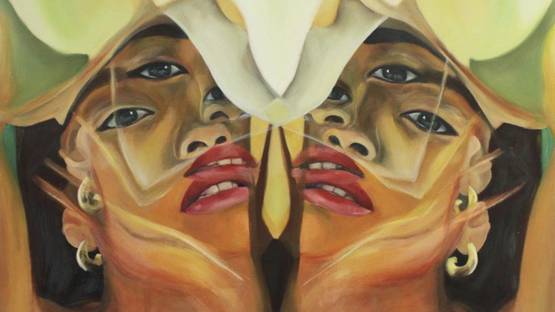 Célia Rakotondrainy, also known as Célia Rako, is a Paris-born contemporary artist who paints portraits navigating between realism and surrealism while approaching notions of identity, culture, and perception. A French artist of Malagasy origin, she decided to devote herself to painting during her studies at Iéseg Paris. At the same time, she studied Art History at Oxford through their distance learning program and in 2019 continued curatorial training at the University of the Arts in Berlin and in the art market at the Freie Universität. Rakotondrainy’s desire to discover, question, and understand the principle of Identity was developed by the cultural diversity that is ubiquitous in her education. She uses the concept of ethnicity as a source of inspiration with respect to diversity and inclusion, using painting as a means of expression. Her ultimate goal is to show “that identity is no different from painting: a construction.”