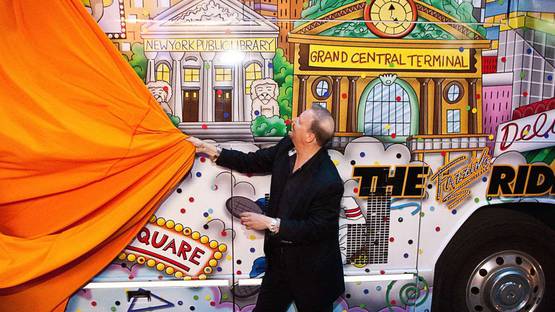 The fascination with popular culture has occupied Charles Fazzino since the very beginning of his career. Apparently moved by the achievements of Pop art he has realized over the years vast opus known largely due to the artist’s introduction to the new technique. Fazzino’s skillful and detailed compositions have earned him a lot of attention over the years since the artist basically remained loyal to the analog technique despite the digital innovations. Such an approach is his main feature and provides the very works with an additional almost vintage layer.

Growing Up To Become Pop

Charles Fazzino is born in 1955, in New York City. He grew up in a family of mixed ethnicity and full of interest in art. Namely, his Finish father was a sculptor and mother was an Italian fashion shoe designer and was from an early childhood acquainted with arts. While in high school, Fazzino had his first solo exhibition in 1968. He attended the School of Visual Arts in Manhattan and graduated with his bachelor of arts in 1977. In the 80’s the artist started to experiment 3-D silkscreen serigraphs and showed it for the first time in Greenwich Village Art Show and finally began using the silkscreen printing process in 1986.

The very process of production has a central role in Fazzino’s work. The three-dimensional compositions are a product of several stages. The base is always a flat drawing that is edited step by step over the course of time perhaps weeks or even months before the limited edition process even begins. Afterward, the prepared model is sent to a silkscreen printer who spends months hand-printing the reproductions. In the next stage, sheets are returned to the artist’s studio where the team of almost 40 craftsmen manually in order achieve the 3D layered effect. The final touch of manual editing is with glitter and Swarovski crystals.[1]

The reputation of sport artist is attached to his name

Fazzino’s adornment towards sports is rather obvious since he has produced quite a number of works depicting huge sports events. Only for Major League Baseball All-Star Games, the artist has created limited edition of ten artworks and in 2014 he decided to donate it and raise funds to support the charity's mission. The special place takes Super Bowl and the artist pays an homage to the event by capturing it on canvas. On the 75th Anniversary of Little League Baseball Fazzino was commissioned to realize official artwork and was installed in the World of Little League Museum. The artist was even commissioned by the United States Olympic Committee to realize official artwork for 2013 Warrior Games.

For the 46th annual Grammy Awards Charles Fazzino was asked to contribute with official artwork. In a collaboration with one of the world’s best-known architects Frank Gehry, Roy Feinson, the mosaic artist, and eccentric photographer David LaChapelle, he created outstanding official artwork. In 2010 JFK International Airport commissioned an artwork from Fazzino for the installment in Collection for American Airlines at Terminal 8. It consists out of two pieces – a large 3D rotating sculpture of an aircraft and is dedicated to all the flights of American Airlines. The work is titled From New York...to the World. There is also a colorful three-dimensional mural depicting an urban landscape of the city itself.

In 2012 Charles Fazzino became involved in the theater due to the collaboration with the producers of the project under the name The Ride. The artist’s intervention implied decorating the bus with his artwork for and interactive tour through Manhattan. It was a full success since Fazzino created the utmost experience which was practically half tourist attraction, half site specific and familiarized observers with the streets of most famous NYC district. The artist was nominated for a Drama Desk Award for Unique Theatrical Experience in 2013.

Disney characters on a world tour

The Respectable Oeuvre of Charles Fazzino

The astounding career which lasts for over more than three decades is recognized due to continuity and immanence efforts to maintain precision and devotion as main features. Interestingly, Fazzino is often referred to as a pop culture historian because of the breadth of his work and the references to the pioneers of the Pop art movement such as Andy Warhol, Keith Haring, and Roy Lichtenstein. During the course of time, his works became exhibited, commissioned and finally part of various private and museum collections and his contribution to the increasing perception of 3D pop art is really important. All of that makes Fazzino’s art practice highly valued and respectable and the main reason is that he is always focused on the communication with the audience offering them the best possible visual experience.