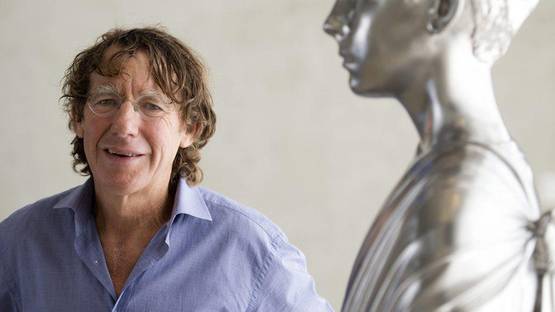 Charles Ray is a famous sculptor and he is widely regarded as one of the most significant artists of his generation. He is best known for his sculptures of altered and refashioned familiar objects and pieces which adhere to a Minimalist aesthetic.

Born in Chicago in 1953, Ray studied sculpture at the University of Iowa and at Rutgers University. In early performance-based works, he began to insert his own body into his pieces, such as one sculpture in which Ray pinned himself between planks balanced against a wall. His later works frequently reflect the reduced geometric forms of Minimalist art, but other pieces also include life-size fiberglass figures and monumental wood carvings.

Ray’s work is difficult to classify. Style, materials, subject, presence, and scale are all variable. What is consistent is as critic Anne Wagner put it, “In all his seamlessly executed objects, Ray fixates on how and why things happen, to say nothing of wondering what really does happen in the field of vision, and how such events might be remade as art.” This and the level of art historical awareness behind his works has led many critics to call Ray a sculptor’s sculptor. Nevertheless, his art has managed to find a large audience, thanks in part to its often striking or beguiling nature.

Ray recapitulated many of the developments in twentieth-century sculpture in his first show in 1971 with an installation entitled One-Stop Gallery. The show consisted of a collection of small sculptures, resting directly on floor. Some of the works, in their attention to materials, were clearly inspired by Minimalist artists like Robert Morris.

Ray currently teaches at the University of California in Los Angeles, and lives and works in the city.