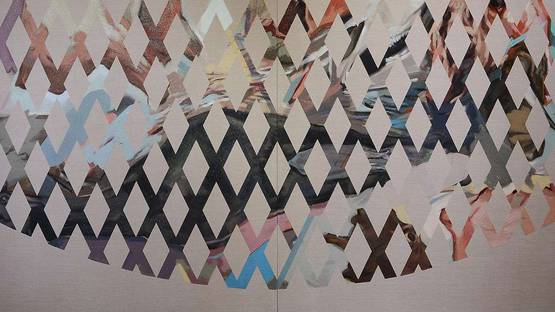 Chase Westfall is an American artist, born in 1980. He is known for his paintings and sculptures which explore the connection between violence and the experience of fear.

In his works, the artist doesn't refrain from painting graphic images of torn human and animal flesh, in addition to his geometric abstraction. His work is a meditation on brutality and terror. He is interested in finding out how the individual and collective experience of fear interlaces with the production of it. Westfall's paintings and sculptures are a detached analysis of this topic, but at the same time, disturbing and brutal display of violence and dread.

Chase Westfall had a number of solo and two-person exhibitions, the last one being 2015 Terror Function, at 101/EXHIBIT Gallery in Los Angeles, California. He participated in many group shows in the United States and Germany.

He was Visiting Assistant Professor at East Tennessee State University in Johnson City from 2011 to 2013, and Instructor of Record at The University of Georgia in Athens from 2010 to 2011. He participated in numerous conferences, panels and lectures.