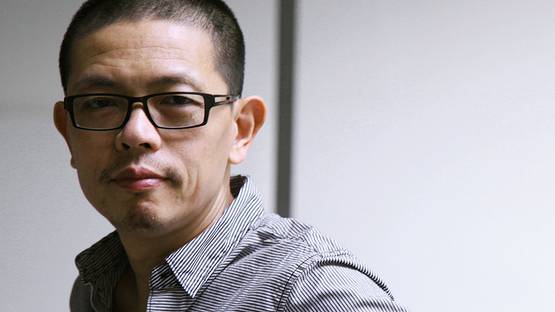 Chen Shaoxiong is a well known Chinese artist primarily trained in Chinese ink but he has worked across mediums including paint, photography, and collage, thus became increasingly focused on the combination of ink, video, and installation.

Chen Shaoxiong, born in 1962 in Guangdong and educated in the printmaking department of the Guangzhou Fine Art Academy, is a founding member of the Big Tail Elephant Collective, one of the most important artistic collectives in the history of contemporary Chinese art.

Often set against the background of an imaginative or imaginary skyline, the artist records the hectic pace and absurdity of everyday existence: fragments from family life, political issues, rumors from the entertainment industry, restaurants, nightlife, and prostitution.

Chen Shaoxiong begins with the directness of media such as traditional ink painting and transforms it into technical media such as video; it is a combination of this and the uncomplicated manner in which the everyday confront more extraordinary issues of modern life that gives the work added import. Thematically, his work often deals with the rapidly urbanizing and constantly changing environments of his home province in southern China, the nature of the crowd, the dominance of the image, the aesthetics of globalization, and public or collective memory.

Today, he works both independently and collaboratively as a member of an Asian artist collective called “Xijing Men” as well as another Chinese artist collective, “Project without Space.” His art crosses mediums, including painting, photography, collage, and conceptual art.

Shaoxiong currently lives and works in Beijing and Guangzhou.