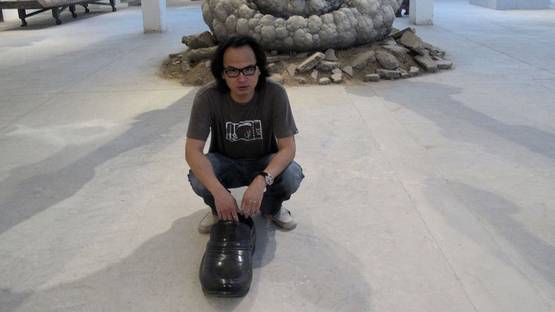 Chen Wenling is a sculptor who was born in 1969, in Anxi, a tiny village in the Fujian Province of China. His family was poor and could not afford to buy him new toys, so he used clay that was readily available in his surroundings to make small sculptures to play with. From these humble sculpting beginnings came the desire to study art as a profession. He decided to attend the Xiamen Academy of Art and Design, and he graduated in 1991. Not content yet with his education, he studied sculpture at the Central Academy of Fine Arts in Beijing, graduating in 1994.

While receiving his education, he said the works of Auguste Rodin, Pablo Picasso, Salvador Dali, Rene Magritte, and Fernando Botero were his inspiration. He combined the influence of these artists with aspects of the Realism movement to make works of art that would become controversial. His sculpture entitled Statue of Liberty and the Gold Bull featured the iconic United States monument with a book that had Liberal Economics instead of July 4, 1776 inscribed on it. He was trying to make a political point that the liberal United States economy was at fault for the 2008 financial crisis, which affected the global economy as well. He made many more political statements with his art, such as those in Happy Life. This series featured sculptures of humans and pigs performing daily tasks. He used pigs because they symbolize what he sees to be the gluttony and unbridled thirst for material objects in modern society. The pigs wear human clothes and perform human actions, while the humans have the traits of pigs.

Chen’s sculptures have been displayed in several places, including the solo exhibit Searching for Identity at Contemporary By Angela Li in Hong Kong and another at the Shanghai Duolun Museum of Modern Art in Shanghai. Group shows that the artist has participated in include Beyond Reality at Beyond Art Space in Beijing, My Chinese Friends at Galleri Susanne Ottesen in Copenhagen, and Under the Radar: Chinese Contemporary Art at the Robischon Gallery in Denver, CO, among others.

The artist currently lives and works in both Xiamen and Beijing.