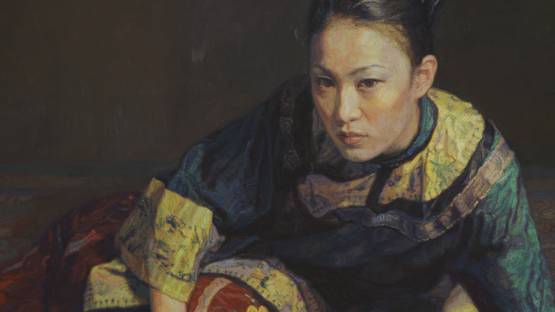 Chen Yifei was the most significant figure in the development of Chinese oil painting and one of the most prominent contemporary painters until his death. His career ranged through all the main crucial changes in Chinese society and yet, he managed to retain his pivotal role in the art world without turbulences and in many spheres – from painting, movie directing, fashion. As well, he is famous for making a fusion of Chinese tradition and Western cultural influences, being one of the first Chinese artistic figures to live and work in New York for two decades.

Chen Yifei was born in the 40' in Ningbo, in the province of Zhejiang Province, but as very young moved with his family to Shanghai. There, at the early age, he graduated from the Shanghai Training School of Art and began his lucrative career in oil painting soon after graduation. First of all, he gained the attention of the officials of the Communist party for his portrayals in the style of Socialist Realism and became one of the leading painters of their circles. But as the Cultural Revolution took place, he turned to more romantic topics with a dominant European aesthetics. From that period is his famous painting Looking at History from My Space (1979), a sort of an answer to the historical and political transitions in the 10’s and 20’s.

Usual Chen Yifei‘s topics from that time are portraits of beautiful Chinese women in traditional clothes, depicted with instruments or other beautifying objects, often in a melancholic and distant attitude on dark backgrounds. The colors are vivid and strong, creating the dynamism that figures lack in their pale passiveness. Even though the content of those paintings was usually Chinese, one could clearly trace strong European style, postures and techniques. At that time Chen Yifei painted series of oil paintings about Tibet and created an interesting group of artworks following the same principles mentioned above. As well, the painter was interested in depicting landscapes in a slightly contemporary impressionistic manner – mostly focusing on canals and rivers – for which he found the inspiration in his traveling’s across Europe and comparisons with his homeland.

In the 1980’ Chen was among the first Chinese painters to travel, study and work in the States. He graduated from the Hunter College, after which he started working for in the Hammer Gallery. At that time, he managed to find a way to make his highly realistic paintings very popular and claimed, what was quite unusual for the New York art scene. In the 1990 this artist moved back to Shanghai, stopped painting and turned to making movies and an entrepreneur career in fashion, high tourism, extravagant furnishing. As he noted elsewhere, the painter wanted to bring the beauty to the Chinese people from the West. The painter passed away in 2005 during the work on his movie The Barber in Shanghai.