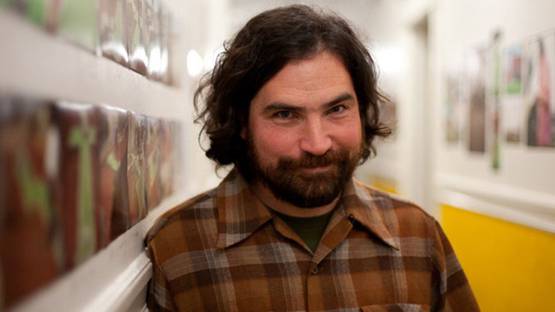 Chris McCaw is an American photographer known for his stark, incandescent, and otherworldly large-format photographs that seem to exist out of time. By using the most basic elements of photography - light and time, he creates remarkable and unique images of landscapes and seascapes across the world. Chris McCaw was born in 1971 in Daly City, California. He graduated in photographic arts and film production from the De Anza College, California in 1990, and got his BFA in 1995 from the Academy of Art, San Francisco.

Amazed by the art of photography, Chris McCaw was from the age of 13 been into photo chemicals and film spools, learning every in-and-out of photography. His teenage years involved self-taught explorations in skateboarding/zine/punk scenes with a fisheye lens and Tri-X, while working lens for a number of skateboard and punk magazines. Throughout high school and into secondary education, McCaw became more intimate with the art of photography and learned everything he could about photography, eventually finding his niche in the world of large format photography.
Loving the simplicity of large format cameras, in 1992 McCaw got his first 4”x5”, and soon after that he has been charmed with the platinum/palladium printing process, which would become his livelihood for many years to come. With recycled optics and large home-brew camera bodies made from wheelchairs and wagons, McCaw began using expired film paper for an intriguing process that would soon fill up most of his portfolio. Ever since his first explorations within large-format cameras, till this day McCaw builds his own cameras and outfits them with powerful lenses typically used for military surveillance and aerial reconnaissance.

McCaw’s most famous and most recent series, Sunburn, represents an iconic approach to the art of photography. In this process of creation and destruction, all happening within the camera, the sun is both the subject of the image and an active participant in the printing process. It goes back to the basics of what photography is - writing with light. As a main subject, the sun has transcended the idea that a photograph is simply a representation of reality, and has physically come through the lens and put its hand onto the final piece.
In some of the images, the sun appears as a singed black dot, and in other, longer exposures, the arc of the sun's rising or setting has slashed all the way through the paper, leaving a scarred absence outlined in scorched black. What emerges underneath all that is an impressionistic rendering of the subject being photographed - a blur of cactus, a calm sea - oftentimes with the path of the sun crossing through it.

Scars by the Light

McCaw sets up his cameras in the desert or near the sea, aimed with the sun fully within the frame. Instead of film, McCaw inserts expired vintage, fiber-based gelatin silver photo paper directly into the camera. As the sun moves in the sky it literally burns a hole in the fibre of the paper, leaving a physical scar of where the sun has been across a desert sky or abstracted mountain range, and making tangible the trajectory of the earth’s orbit around the sun in scored markings. The sun's lens-concentrated rays scorch the paper, and often slash straight through it, leaving ash-edged absences. Pointing the lens at the sun, McCaw exposes the paper for periods of time ranging from 15 minutes to 24 hours. The sky, as a result of the extremely intense light exposure, reacts in an effect called solarization - a natural reversal of tonality through over exposure, creating a positive image on a negative. The gelatin in the paper reacts to the sun’s rays and leaves traces of color around the burned marks, subtly toning the paper with hues of orange, red, metal and ash.

McCaw travels to distant corners of the globe such as the Galapagos, the Sierras and the Arctic Circle, to capture variations in placement and movement of the sun’s markings that occur during unique solar events, such as solar eclipses, vernal and autumnal equinoxes, and midnight suns.
In his large-scale multi-panel work, Sunburned GSP#492 (North Slope Alaska, 24 hours), McCaw captured the natural phenomena of the midnight sun, an event occurring only during the summer solstice in locations north of the Arctic Circle. This series of thirteen 20” x 8” sheets depict the full arch of the sun in a continuous, serpentine mark singed into the paper, in which the first panels depict the sun at its apex, high noon. Creating the form of sinusoid by grazing the horizon line, only to rise again, the sun marks the beginning of a new day.

McCaw’s artistic practice is firmly rooted in the history of photography while simultaneously pushing the medium in new directions. His experimental process recalls the work of photography pioneer, Henry Fox Talbot, combined with the slash and buchi paintings of Lucio Fontana. The pictures pay homage to photography's essential nature as a record written by light, and they chronicle, with profound beauty and elemental simplicity, what it means to occupy a specific place on earth at a specific time, bringing awareness to humanity’s place in the universe.
“During all this I have become attuned to the reality that we’re all running around on a spinning marble orbiting a fiery ball”, states McCaw.