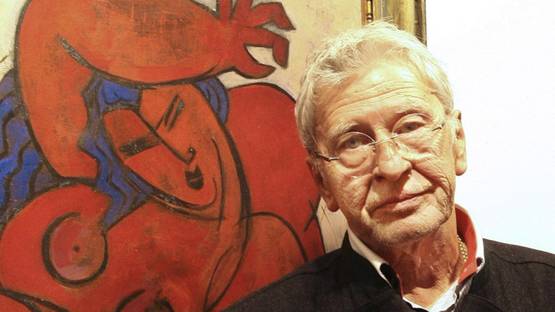 Art doesn’t address reason. Rather, it speaks to the subconscious, evoking and provoking emotions hidden deep within each and every one of us. Christian Peschke is a German contemporary artist, who works in painting and sculpture. He is considered to be one of the foremost representatives of the 20th-century modern art and a notable figure in the European art of the 21st century. The visual language of his paintings is quite colorful, exclaiming joy for life and love for sensuousness, while his sculptures sometimes defy the laws of gravity, seemingly floating across the ground. The artist also breaks the traditional borders between the art and its viewers, inviting them to come closer, touch and feel the figures under their fingers, to experience emotion on a whole new level.

His art is completely isolated from any purpose or utility in this world, since the artist sees himself as a person who re-invents the world, placing things in new light and people in the new environment. His original and unique reality doesn’t offer a perfect world – it’s actually the world open to joy and not dominated by suffering. With an attitude that all artists should support the totality of the senses and appeal to all emotions, Peschke is an extremist when thinking about perception. His sculptures aren’t made just to be seen, but they need to be touched as well, so the marble or bronze representing the skin could also be felt. The fullness of the world needs to be explored with the fullness of perception. Through his art, Peschke provides an opportunity for the viewers to encounter a new world, where the reality can be seen and felt.

The sculptures need to be touched and felt

A Unique Understanding of Art

He was born in Säckingen and grew up in Stuttgart. Much of his color symbolization came from the knowledge he gathered while studying at the Stuttgart Art Academy under the watchful eye of Professor Gerhard Gollwitzer. Following the awareness for sensuality seen in the works of Rodin, Maillol and Despiau, and the advice given to him by Salvador Dalí and Arno Breker, Peschke was able to create his formal world of painting and sculpture. His undisputable talent is evident in all of his works and his artistic writing is simply unmistakable. The artist’s way of perceiving and creating art secured him a place in the pantheon of the greatest painters and sculptors of all time.

The artist follows the awareness for sensuality

Peschke’s powerful representation of the Female is raised to a sacred, altar-like status, and his animal sculptures display beauty, sensuality, vitality, and force. All of his work requires a special kind of perception and deeper understanding. He seeks not the individual but is rather interested in the archetype, a symbol that gives the life force to the body. The delicate balance between movement and stillness provides the engulfing and captivating experience of harmony.