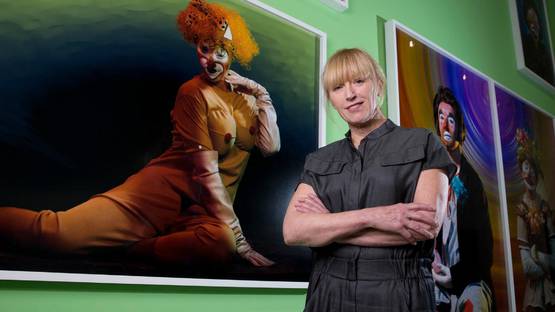 Using the medium widely accepted as the one that reflects the reality in the most precise way, Cindy Sherman managed to achieve exactly the opposite effect, criticizing the subject through the idea of subjective nature of human intelligence and instability of visual perception. Beginning with the painting in hyper-realist style in the midst of the affirmation of American Feminism during the 1970’s, the artist shifted to photography aiming to explore the variety of female roles in the society. Questioning the seductive and often relentless influence of mass-media over both individual and collective identities, Sherman put herself in front of the camera, playing the fantasy game of pretending. Her extensive series of self-portraiture processes the themes of sexual desire and domination, pointing out the shaping of self-identity as mass deception and compromise between social obtrusions and personal intentions. Employing the elements of Hollywood movies, such as make-up, costumes, and scenery through the dramatic atmosphere of scenery images, her photos became common illusions, the reflection of concepts of celebrities, entertainment, sexual adventure, and similar social phenomena.

Cindy Sherman was born on January 19, 1954, in Glen Ridge, New Jersey, but she grew up in Huntington, Long Island, where her family moved soon after she was born. Generally uninterested in art, her father was an engineer and mother a reading teacher, it was surprising when their youngest daughter chose to study visual arts at the State University of New York, at Buffalo. Starting as a painter, she was quickly faced with the limitations of this medium, finding the solution in photography. “There was nothing more to say. I was meticulously copying other art and then I realized I could just use a camera and put my time into an idea instead”[1]. Although initially failed photography class as a freshman, she decided to repeat the course, which was only more convincing that she has chosen the right thing, probably because she studied under the Barbara Jo Revelle, the influential art instructor who introduced Sherman to Conceptual art and other progressive movements and media. At the college, she met Robert Longo, her intimate partner until 1979, Nancy Dwyer, and Charles Clough with whom she has founded Hallwalls, the Center for Contemporary Art, a multi-arts association that functions since 1974 to present day. After she finished her studies, Sherman moved to New York and in 1977 settled in her downtown home and studio where she began to work on her first series of photographs of herself, embodying the characters of “everywoman”. For the next three years, she played the roles of various female archetypes, from housewife and noble lady to prostitute, film noir siren, and pin-up girl, exhausting the myriad of timeless characters that refer to the feminine. Always working in series, the photographer works alone in her studio, photographing self-portraits in various roles, being an author, director, hairstylist, make-up artist, costume designer, and model at the same time. His first series, Untitled Film Stills, soon became her landmark. It consisted of 69 black and white photographs depicting Italian neorealism in American film noir of the 1940’s, 1950’s, and 1960’s. Avoiding the titles, every image was marked by number and conceptually they could be divided into several different groups. After three years, she decided to stop, running out of clichés. Since 1995, the series is a part of MoMA, New York collection and has been estimated $1 million.

With her Untitled Film Stills Sherman became a prominent member of the New York art scene, which provide her first solo show at The Kitchen, non-profit exhibition space and commissions for the magazines, although the one for a centerfold image for Artforum was rejected marked as too racy. It was never officially confirmed, but there were the speculations that her next series created from 1985 to 1989, Disasters and Fairy Tales, was a response to the act of rejection, considering the darker palette and the gloomy atmosphere of the scenes that provoke the viewer to find beauty in the ugly grotesque. In these two series, she used visible prostheses and mannequins for the first time. During the 1980’s Sherman started to use color film, very large prints and focused on lighting and facial expression which was evident in the series Rear Centerfolds/Horizontals (1981), inspired by fashion and pornographic magazines was commissioned, but never used by Artforum magazine. Once again, she played a young woman in the various roles, from seductress to scared victim. In 1982, she worked on Pink Robes series, larger than size-life images that showed close-ups of her wearing or holding the pink bathrobe. Imagined to look like the model just after the photo session, these photos reveal the real Cindy Sherman, deprived of any theatrical elements. As a response to controversy and censorship involving work of Robert Mapplethorpe and Andres Serrano at the Corcoran Gallery, she created her Sex Pictures (1989), removing herself from the scenes, finding the substitute in a doll. With the aim of shocking the making the scandal, she presented close-ups of dolls’ sex scenes with prosthetic genitalia. As the culmination of the 1980’s, Sherman made 35 large pieces as the reminiscent of the European portrait painting from 15th to the early 19th century, named History Portraits where she took over the subjects of Raphael’s La Fornarina, Caravaggio’s Sick Bacchus, and Judith Beheading Holofernes, or Fouquet’s Madonna of Melun. Living in the Europe during this period, her inspiration came directly from the art pieces kept in the greatest museums, although she actually never entered either of them, claiming that was not a fan of them. "Even when I was doing those history pictures, I was living in Rome but never went to the churches and museums there. I worked out of books, with reproductions. It's an aspect of the photograph I appreciate, conceptually: the idea that images can be reproduced and seen anytime, anywhere, by anyone."[2] Still, her Fornarina differs from the classic one, exposing her milk-swollen breasts made of plastic and fake pregnant belly, praising Sherman’s deconstruction of overtly masculine visions of the female in the history of art. Starting to incorporate prosthetic body parts selected from the medical catalogs, with every new series she used more and more artificial things and less Sherman herself. Sex Pictures introduced medical prosthesis in the service of pornography, as a comment on the objectification of both men and women, social taboo when it comes to sexuality and relationship between sex and violence.

From Still Photography to Motion Pictures

Influenced by her husband, film director Michel Auder from whom she divorced in 1999, Sherman changed her still photography to motion pictures, making the directorial break-through with the movie Office Killer and acting debut in John Waters’ Pecker (1998) when she played herself. Over the last fifteen years, she became involved in digital manipulations, like in the series Clowns Cycle, where it enabled her to add garnish background and montages of numerous characters. She went further in Society Portraits where are the representations of one undetermined woman placed in opulent sets and rounded with the ornate frames. The exhibition at MoMA in 2012 showed photographic mural, her first transformation of space through site-specific fictive environments. Using the Photoshop, the tools enabled her to elongate the nose, narrow the eyes and make lips look smaller. Following her previous commission for the Pop magazine wearing the Chanel’s vintage clothes from the archive, the solitary oversized female figure is located in the painterly landscape she photographed in Iceland during the eruptions of the volcano and on the isle of Capri. Within her rich oeuvre, fashion series make an important part since 1983 when fashion designer and retailer Dianne Benson commissioned her creation of advertisements for her store which appeared in several issues of Interview magazine. Other commission came from the French fashion house, Dorothee Bis whose clothes were supposed to appear in French Vogue. Her seemingly exhausted, angry, abused, scared, and psychologically disturbed model represented the complete opposite of the world of fashion glamor people got used to. Sherman has a significant collaboration with Harper’s Bazaar, Rei Kawakubo and with Comme des Garcons for which she produced the Post Card Series[3]. In 2006, she made advertisements for Marc Jacobs and four years later collaborated on a design for a piece of jewelry.

From 2000, she became involved in digital manipulations like in the series Clowns Cycle

Cindy Sherman - the Photographer of Performance

As a performative photographer, Sherman’s process of creation begins with hours of preparations, such as layering on the wigs, prosthetics, make-up and carefully chosen clothes, everything with the aim of embodying the things and expectations imposed on women by society and culture. This private introduction and creation of special identities have a very important role in the final photographic work. Through her own chameleonic myriad of characters, the artist actually questions the collective identity as it surfaces in mass media. Although insisting for decades that her characters had nothing to do with her, after her large solo show Imitation of Life, held at the Broad museum in Los Angeles in 2016, Sherman admitted that there’s still something of them in her. Including her most important pieces created from 1975 to the present, exhibition showed her Hitchcock’s inspired earliest film stills, series commissioned by Artforum and rejected for being too disturbing, the history portraits, grotesque vomit images and sex pictures and the manic clown for the end, placed on the green walls with the aim of emphasizing their psychedelic appearance. There was also her latest work – first new art pieces in five years, processing the theme of filmmaking and aging. Depicting vividly colored, dolled up former silent film divas struggling to retain their radiance and good look could be the same persons from her photographs four decades ago. Although the artist herself admits that there is no direct connection between two bodies of work, they surely represent the return to her early film inspiration. But the difference is huge. After the common preparation for the characters, the use of high resolution showed more imperfections that she has expected which was shocking, especially after the five years of creative break. Making some reparations in Photoshop, she still kept the essence that revealed the struggle of the women in the pictures[4].

Through her own chameleonic myriad of characters, the artist actually questions the collective identity as it surfaces in mass media

Creating the photographic portraiture, deeply grounded in the present, but with an extension in art tradition that imposes on the viewer to adopt common stereotypes and cultural assumptions. Using the various characters, the artist directly confronts the viewer suggesting that unrevealed affinity for deception is maybe the only “virtue” that truly unites us. Widely recognized as the master of social critical photography, Cindy Sherman was the most important member of the Pictures Generation, a group of American artists who created during the early 1980’s, a period of rapid spreading of the mass media imagery. Starting from the unconventional space for her first solo show in 1980, Sherman was the artist whose work opened the Metro Pictures Gallery later the same year. Since then, she has been the part of numerous international events, such as SITE Santa Fe (2004), the Venice Biennale (1982, 1995), and five Whitney Biennials. Besides countless group shows, her solo exhibitions has been held in the most prominent institutions around the globe, including Stedelijk Museum in Amsterdam, Whitney Museum of American Art in New York, Kunsthalle Basel, Hirshhorn Museum and Sculpture Garden in Washington, the San Francisco Museum of Modern Art, the Serpentine Gallery in London, the Scottish National Gallery of Modern Art, and Martin-Gropius-Bau in Berlin, among the others[5]. The traveling retrospectives have been organized several times – the biggest one from 2012, organized by the MoMA chronicled her work from the mid-1970’s and included more than 170 photographs. In 2009, Sherman was included in the seminal show The Pictures Generation, 1974-1984 at the Metropolitan Museum of Art.

The artist is represented by Gagosian Galleries in New York, Beverly Hills, and London, and by Me Collectors Room in Berlin.

Featured image: Cindy Sherman in front of her work at the Broad museum, 2016 - Photo by Dan Tuffs
All other images via wikiart.org