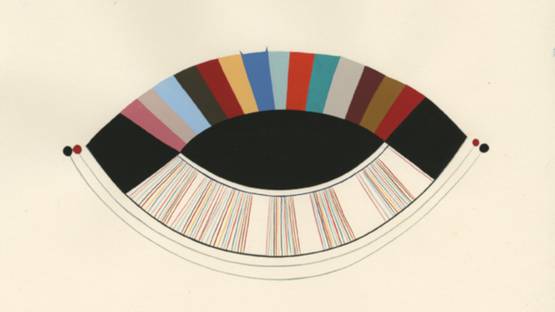 By moving from a highly stylized figuration to pure abstraction, American artist Clare Rojas developed an authentic and visually appealing style based on the combination of craft and fine art. Her distinct narratives aim to tackle both the gender roles and interactions between humans and animals from a specifically framed female perspective. Profoundly influenced by Pop art, American folk art, Byzantine mosaics, and architecture, Rojas works in a variety of media such as painting, installations, street art, video, and children's books. While some works depict vibrant quilt-like patterns evocative of folk art, the others feature purified geometric forms and interiors reminiscent of Bauhaus design, and what they share in common is a totemic quality.

The artist earned her BFA from the Rhode Island School of Design, and her MFA from the School of the Art Institute of Chicago. Rojas also performs as a musician under the stage name Peggy Honeywell.