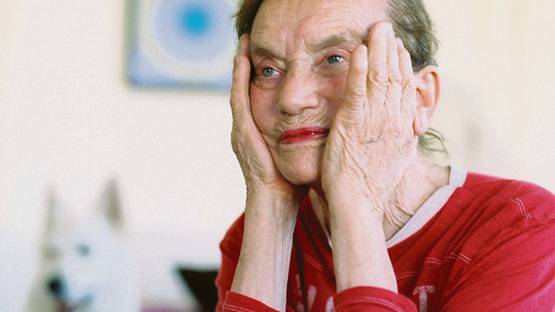 Claude Lalanne, was a sculptor celebrated for her expressive and whimsical metal sculptures, furniture, and jewelry. Lalanne studied architecture at the École des Beaux-Arts and École des Arts Décoratifs. She involved herself in the artist community in Impasse Ronsin, Montparnasse, Paris and became friends with American artists Larry Rivers and Jimmy Metcalf who helped her develop the art of electro-plating.

Although a successful artist in her own right, Lalanne was also known for her collaborations with her husband Francois-Xavier Lalanne. She had met him at a gallery in 1952, and the couple came to be collectively referred to as “Les Lalanne”. A series of commissions by Yves Saint Laurent and Pierre Bergé, beginning in the mid-1960s, earned them widespread recognition. Several works designed by Claude for Yves Saint Laurent were featured as part of his estate sale at Christie’s in 2008, including a group of mirrors with bronze vegetal motifs, created between 1974 and 1985. While the era was a major exponent for Abstract, Conceptual, and Pop Art, Les Lalannes found inspiration in the traditional lines, forms, and textures present in nature. Claude was particularly drawn to plants and flowers, Francois-Xavier, to animals.

The first exhibition of her work was held in 1964 at the Galerie Claude Bernard in Paris. Her pieces have since been incorporated into the collections of major institutions, such as the Cooper Hewitt, the National Design Museum in New York, and the Georges Pompidou Centre and Musée National d’Art Moderne in Paris.