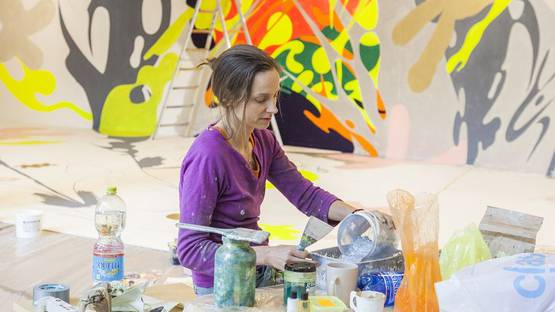 Claudia Chaseling is a German artist, born in Munich in 1973. She is known for painting large canvases, concrete objects, walls and floors. The artist exhibited her works in over fifty solo and group exhibitions, in the United States, Australia, Germany, Sweden, Luxembourg, and Austria, among others.

Claudia Chaseling’s work comprises wall size paintings and space filling murals. The artist creates swirls of organic from, upside down landscapes with reversed perspective and bright fluorescent wave structures with political content. The imagery of her Spatial Paintings consists of distorted landscapes, estranged places, mutated creatures and plants whose deformation is caused by radioactive poisoning. Images of places and landscapes, once so familiar, are now estranged.

Between Structure and Chaos

Chaseling’s expansive wall/floor paintings interrupt the geometric order and balance of the exhibition space, through their optically vast depth and sway between the 2 and 3 dimensional. The perceptual interference of the paintings is subtle and at first only perceived intuitively, forcing the viewer to question, what causes this effect. Using a specifically developed technique of tempera, color pigments and aluminum shapes the artist addresses the antagonistic relationship between structure and chaos. From a state of disorder, Chaseling creates new compositions. The result is an amorphous system of complex fragments, painted structures that are reminiscent of light reflections, waves rolling on the water surface and objects in form of capsule-like creatures. The artist creates an atmosphere of alienation that pulls the observer into a new ambiguous perspective, searching for the undiscovered Zeitgeist through painting.

Major grants and scholarships received in Australia and Germany – include those of the German DAAD, the Samstag Scholarship, the Studio Award of the Karl Hofer Society, the Australia Council for the Arts Grant in 2014 and the 2015/16 artsACT Project Grant. She has taken part in various international visiting artists programs and artists residencies, among others at the Texas A&M University, at Yaddo in New York, the International Studio and Curatorial Program in New York City and the Australian National University (ANU).

Featured image: Claudia Chaseling in her studio, photo by Marko Junttila
All images courtesy of the artist