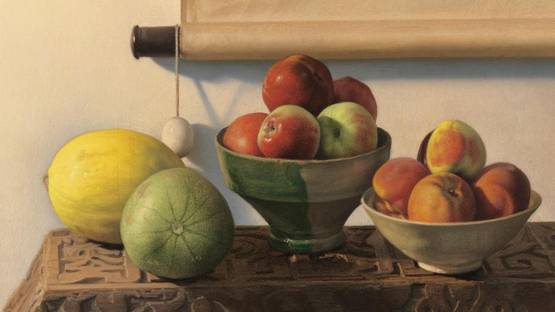 Born in Valparaíso, Chile, Claudio Nelson Bravo Camus was the eldest son in a family of seven children (he had one older sister). His father, Tomás Bravo Santibáñez, was a wealthy landowner who owned three ranches. Formally educated in Jesuits schools in Santiago, Claudio was obsessed with drawing. The prefect of his elementary school, Father Dusuel, discovered his notebooks filled with drawings and he liked them. It was Dusuel who took young Bravo to the studio of Miguel Venegas, where he began studying art in 1945. As the oldest son, Claudio was destined to follow the path of his family’s fortune. So it doesn’t seem that strange that Tomás was very hostile to the very idea of his eldest son becoming an artist. Reluctantly letting him continue his studies, he would often say harsh words to his son: “You’ll starve. You’ll be a flop, a bum.” Quite opposite, his mother, Laura Camus Gómez (who was an amateur artist in her youth) fully supported the artistic tendencies of her son.

Bravo studied under Venegas for three years, and it remained the only formal instruction he received in the subject of art. With little opportunity to study works of art other than those present in the studio of his teacher, Claudio became familiar with a variety of European artists and their work through books and periodicals. Feeling a deep connection with European art, ancient art, Renaissance art, he realized his work had nothing to do with his heritage. “I am only South American because of my passport.” He had his first exhibition in 1954 at the age of 17. It was a success, and all the works were bought. These paintings and sanguine drawings were heavily influenced by Picasso, especially the Blue Period. As this time he was living in Santiago and was very active in artistic pursuits, writing poetry, dancing professionally and working for the Teatro de Ensayo of the Catholic University. Having realized all these activities are leaving him next to no time for painting, Bravo decided to look for a different environment to work in.

He relocated to Concepción, a city on the Pacific coast several hundred miles south to Santiago. He lived there for four years, and it was here that the artist began creating his first portraits and receiving commissions. Portraiture was to remain his principal occupation for many years in South America and later in Europe. However, feeling dissatisfied, Bravo realized that a radical change was necessary and decided to relocate once more, this time to Paris. The ship faced violent storms, and the artist was determined to disembark at the first possible port, Barcelona. With language and the general atmosphere in Spain working in his favor, Bravo decided not to continue his journey to France. He soon found himself in Madrid, where he continued to prosper as a society portraitist. In 1972, once again in need of solitude he needed for more serious painting, he decided to leave Spain and start a new life in Morocco, settling in Tangier – the very land that first gave him a sense of relief after all the storms he had survived on his journey to Europe.

In his own words, he chose Tangier because of the climate and light. “Places like Fez or Marrakesh are too hot in summer and too cold in winter. Tangier has an absolute Mediterranean light. I’ve always tried to capture Mediterranean light in my work.” In his paintings of Tangier, Bravo sought to evoke the color and mystery of this African town. He soon faced a problem – he could only get male models. Islamic women would not pose for him. That was one of the reasons he bought apartments in New York and Madrid – to expand the range of types that he painted. In 2000, the artist established his winter residence in Marrakesh and began dividing his time between the capital of Morocco and his residence of Tangier. On June 4th, 2011, at 74 years old, Claudio Bravo suddenly passed away due to two heart attacks. With over 50 years of international career, he is known as arguably the greatest realist painter of his time. Even Google paid homage to this great artist, posting a Doodle to commemorate Claudio Bravo Camus’ 83rd birthday.