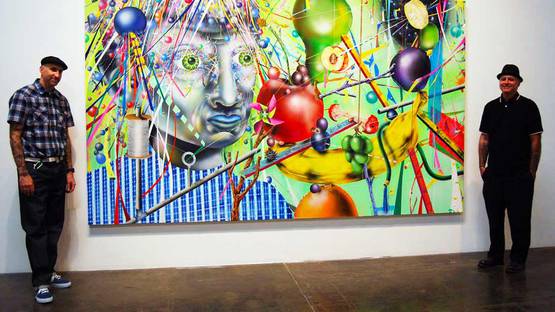 Together, American artists Rob Clayton and Christian Clayton make up the artistic duo known as the Clayton Brothers. Through a symbiotic process of collaboration, they create tightly-packed narratives within vibrant painted canvases, drawing inspiration from nearby shops and businesses, overheard conversations, and intriguing neighbors.They originally worked independently on artistic projects, illustrations, and advertising assignments, and began to contribute to each other's work in 1996.

Rob Clayton was born in 1963 and his brother Christian in 1967. Both artists earned BFA degrees from the Art Center College of Design in Pasadena, CA. After spending most of their childhood in Colorado and vacationing frequently in California, the Clayton Brothers were inspired by the aesthetics of surf culture, street art, and punk rock. The Clayton Brothers devise a common goal for a particular piece and work toward it by incorporating their shared interests and techniques.

For these two collaboration is more than a process: the concept of symbiosis resonates through every aspect of their paintings and installations. In a practice devoid of ego and restraint, the Clayton brothers develop intense compacted narratives on an intuitive basis. Rob and Christian Clayton seldom work on the same canvas at the same time, or discuss of their projects during making. Playing off their unspoken synergy, they take turns inventing, adding to, and editing each piece, propelling their ‘stories’ through spontaneous improvisation. Entwining their independent approaches, styles, and palettes, their works operate as co-authored epics, fusing the concept of self with the communal.

Brothers currently share studio space in La Crescenta, a neighborhood in Los Angeles, CA. Their work has been displayed at The Armory Show in New York, the Royal Academy in London, the Madison Museum of Contemporary Art in Madison, WI, and Art Basel Miami, and is included in both corporate and private collections. Both Rob and Christian serve as faculty at Art Center College of Design in Pasadena.