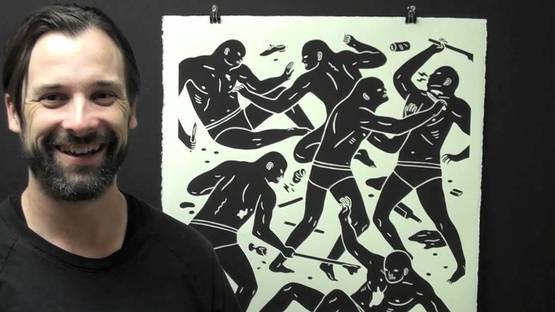 Cleon Peterson is an LA based artist whose chaotic and violent paintings show clashing figures symbolizing a struggle between power and submission in the fluctuating architecture of contemporary society.

Cleon Peterson was following his bliss…

He was born in Seatlle and received his MFA from the Cranbrook Academy of Art in Detroit, MI and a BFA in Graphic Design at Art Center College of Design in Pasadena. He actually left the school system at the very early age fourteen to obtain his GED and head straight to art school.
“I don’t have contempt towards good schools or the fundamentals they teach. As a kid I was lucky because I lived with my grandfather who was an English professor, theologian, and poet. We’d take long walks and talk philosophy, sociology, religion, psychology, literature and art. He was a cynic and we’d always talk about how absurd the world was. Before I went to college, in what would have been eighth grade for me, he taught my brother and me home school. We read Shakespeare and Machiavelli and memorized all the world’s rivers. We didn’t conform to the standard school structure, but just studied what was of interest at the time. Joseph Campbell talks about following your bliss. In the end, I think everyone should follow this advice and find something like and pursue it.”
For a while, he used to live in San Diego and was one of the most sought after illustrators in the skateboard business. Cleon has designed logos and graphics for Foundation Skateboards, Pig Wheels, and Zero Skateboards to name a few.

Violence as the status quo

Cleon's paintings are monochromatic while channeling at the same time the fashion sensibility of the early 80's, complete with skinny ties and day glow colors. In Cleon Peterson’s anxiety-riddled world, violence is the status quo. His dystopian scenes evoke Thomas Hobbes’ description of life as war between individuals: “solitary, poor, nasty, brutish, and short.” Many of Peterson’s paintings feature images of hostility removed from any scenery that might bring reason to bear a sense of justness to the brutality; the only context given is the mélange of evisceration coating the floor. In other works, the setting is a cityscape where storefronts only serve to indulge the base narcissism and vice taking place on the streets.
His shadowy figures mete out violence in images that could just as well depict justice as they do barbarity. Peterson’s work can be viewed as both a continuation and a progression of past works, in which graphically rendered scenes of sadism portray chaos as the inevitable order of things. Many of those scenes have featured characters with physical appearances largely undifferentiated from one another, suggesting a classless unsympathetic society, yet in this new body of work Peterson incorporates “shadow” figures and a new dichotomous order. There are haves and have-nots, but amid the havoc it’s hard to decide who’s who. 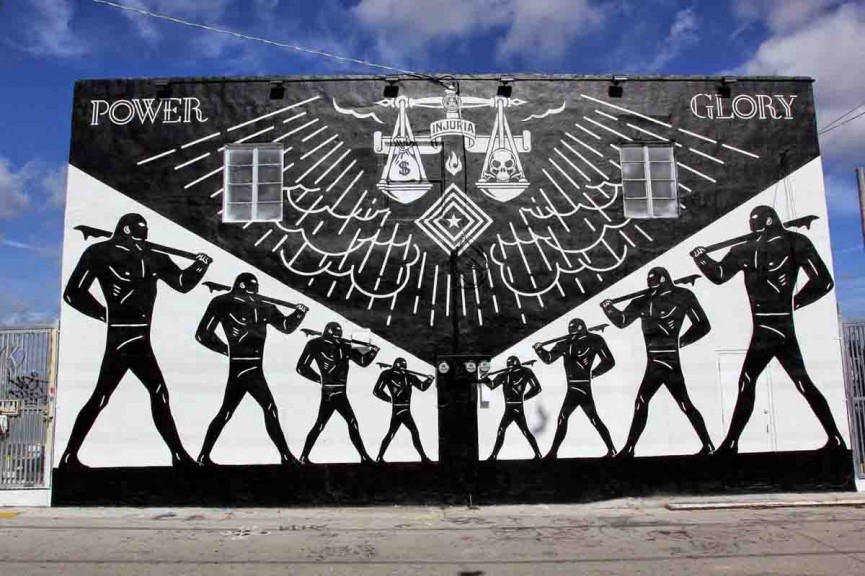 One thing that remains clear throughout Peterson’s work is the incongruity of insensate cruelty and acute suffering. Though their acts are purely savage, the “shadows” hardly show signs of malignancy in their reductive facial features. Their motions are calculated, their postures balanced, athletic and mechanical. Their victims, by contrast, appear defenseless and in shock, often wearing expressions of horror reminiscent of the targets in Goya’s painting The Third of May 1808. They are not, however, powerless in all senses, if the backdrops of topiaries and foyers suggest anything. Ultimately, it’s up to the viewer to take sides and feel sympathy or schadenfreude a pleasure derived from the misfortunes of others., indignation or catharsis.
“The darker experiences of my life stand out and create mental and emotional dissidence. I’ve always been driven to understand my life and my place in the world and to create something meaningful in the process. I’ve had plenty of positive experiences in life too, but because of my natural disposition anger and chaos are what fuel my creativity.”