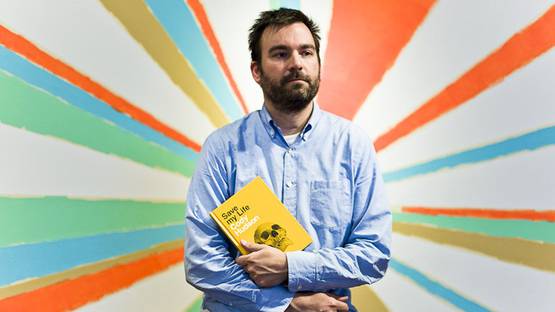 Cody Hudson is a Chicago based artist born in 1971, also known for his graphic design contributions under the name Struggle Inc. Known for the production of clean, multi-dimensional graphics, Cody’s design aesthetic is part urban modernism, and part organic visual deconstruction.

Cody painted animation cells for a while. Cody thought it was going to be a fun job but it was basically paint by number for hours at a time. He was filling in Sparky The Firedog. Cody would actually fall asleep while painting and wake up after dropping the brush. Ages before that Cody was working at Pizza Popper in Kenosha, Wisconsin but he also held it down at Piggly Wiggly for 3.

Cody started going to rave parties in Milwaukee and Chicago and eventually ended up throwing a party. To save money he designed the flyer himself. After that cody stopped doing parties and instead did flyers. By doing those flyers he learned about things like CMYK, and spot colors and paper stocks and whatnot.

This was the early to mid-9os, so while most flyers were all raved out, Cody was doing stuff on uncoated brown stock with silver ink and such. Pretty tame for the design world but it was quite different for the rave world at that time. He moved to Vermont for a bit and worked at JDK doing loads of board graphics for Burton snowboards and learning from all the great designers that worked there.

It was like going to school but getting paid. After that Cody moved back to the Midwest for a bit, freelanced and bounced around a bit, moved to Miami for a bit and worked full time with 12oz Prophet, moved back to Chicago, back to Vermont, eventually moved to Jersey where Cody was in charge of all men’s’ product graphics at Ecko Unltd. So Cody Hudson basically learned about clothing based design.

Then he moved back to Chicago and have been there ever since.

His graphic work and paintings have been exhibited throughout the US, Europe and Japan including the Museum of Contemporary Art (Chicago), New Image Art (LA), Rocket Gallery (Tokyo), The Lazy Dog (Paris), & Andrew Rafacz (Chicago).

In 2006 Cody was commissioned by the City of Chicago Public Art Program to create a permanent installation at the Sox/35th CTA station as part of the Arts in Transit Program. Cody’s work has been featured in numerous magazines and publications including idN, Arkitip, Anthem & Juxtapoz.